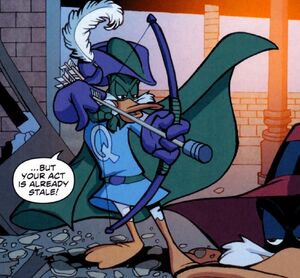 Quiverwing Duck is a "Darkwing" with significantly less issues of arrogance than his peers. In times past, Quiverwing Duck was Darkwing Duck, a detective-type vigilante who fought crime alongside Quiverwing Quack. Upon Quiverwing Quack's death, Darkwing honored her by becoming Quiverwing Duck and adopting her archery methods. Whether innate or a result of the tragedy, Quiverwing Duck possesses high mental discipline that allows him to maintain a clear thought process in stressful situations and resist mind control to a small degree. 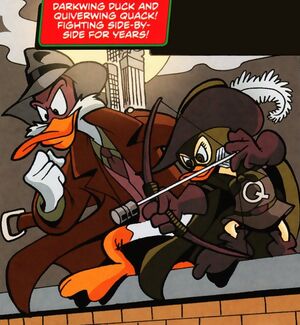 Months after meeting Quiverwing, Darkwing updated his costume, doing away with the turtleneck in favor of the tie that used to be part of Quiverwing's detective outfit. Because Darkwing never saw the detective outfit, this costume selection is something that can be assumed to be something inherent to the psychology of a "Darkwing" and appears to symbolize a "Darkwing" with an integrated hero-family life. Campaign Carnage, Part 4

Quiverwing, like most "Darkwings", is a small, lean duck with white feathers. He used to dress up in a brown trenchcoat, grey fedora, and purple mask over his regular clothes back when he was still Darkwing Duck, but after his change to Quiverwing Duck he came to wear the Quiverwing Quack outfit minus the shoes. This outfit consists of a green mask, a purple and green bycocket with a white plume, a green cape tied around the neck, a blue-purple tunic with a white "Q" on the chest and long sleeves, and purple gloves. Crisis on Infinite Darkwings, Part 3

One night of patrolling, Quiverwing responds to a robbery. At the scene of the crime, he finds Negaduck and aims his bow at him. He does not notice Magica De Spell behind him, who incapacitates him with her magic so they can abduct him to the cross-dimensional transit system. Negaduck notes that he recognizes Quiverwing's costume, but he doesn't know from what. Crisis on Infinite Darkwings, Part 2 Despite Quiverwing's noteworthy resistance against Magica's mind control, he is the third "Darkwing" the duo unleashes on the St. Canard of Darkwing Duck. After helping Ammonia Pine escape from the police to frame Darkwing, Crisis on Infinite Darkwings, Part 1 Quiverwing makes his way to 537 Avian Way. At the time of his arrival, Darkwing Duck and Morgana Macawber have retreated there to discuss the invasion of the "Darkwings". Quiverwing discovers an entrance to the tunnel system behind Darkwing's chair set and infiltrates the house. His first course of action is to nail Darkwing to the wall with three arrows, which prompts Morgana into action. Her magic, however, is repelled by Magica's. Seeing Morgana injured, Darkwing musters the strength to escape and fight back. Quiverwing proves to be his better when it comes to combat, but is defeated when he's hit with his own boomerang-arrow and is knocked into several family photos depicting Gosalyn. Even in his mind-controlled state, the memory of Gosalyn is strong and he remembers their crimefighting partnership, her death, and his vow to continue in her name. The flashback breaks the mind control and he leaves Crisis on Infinite Darkwings, Part 3 to hunt down the other "Darkwings" and end their attack on St. Canard. None of them are a challenge until Quiverwing comes face to face with Darkwarrior Duck. Darkwarrior has the superior gadgets, those being a tank and a robot army, yet Quiverwing's versatility knicks him the victory. The last laugh is still for Darkwarrior, as he taunts Quiverwing with the shared knowledge, obtained from their cross-dimensional journey, that Morgana will go missing soon, thus rendering anything Quiverwing does to benefit Darkwing today near-meaningless. Quiverwing takes the bait and returns to Magica's and Negaduck's hideout, where a battle has been initiated. Quiverwing is just in time to steal Magica's source absorber and thereby save Morgana from being mindwiped. It also frees all the "Darkwings" from her mind control. The stakes of the battle get upped at the arrival of Paddywhack, who fuses with Negaduck to create one ginormous adversary for the heroes. While Morgana and Magica keep him in place and Darkwing's immediate circle goes to fetch the tronsplitter to undo the fusion, Quiverwing gathers the other "Darkwings" to assist in the deadlock. They've considerably weakened Negaduck-Paddywhack by the time Darkwing's team returns and splits the two villains. The profit is shortlived as Paddywhack steals the tronsplitter and threatens to split up everyone into particles. Gosalyn shows up for some tough talk then, and the sight of her gets a response of fatherly love from all "Darkwings" present. Quiverwing quickly hands Morgana the source absorber he stole earlier so she can gather the crowd's love with it and channel it against Paddywhack to force him back in his box. When soon after the time comes for the "Darkwings" to return to their own dimensions, Quiverwing is the last to get to talk to this dimension's Gosalyn and leaves her with the advice to always be her amazing self. Crisis on Infinite Darkwings, Part 4 Inspired by Quiverwing's words and actions, Gosalyn dons her Quiverwing Quack costume once more the first chance she gets. F.O.W.L. Disposition, Part 2

Retrieved from "https://darkwingduck.fandom.com/wiki/Quiverwing_Duck?oldid=21377"
Community content is available under CC-BY-SA unless otherwise noted.