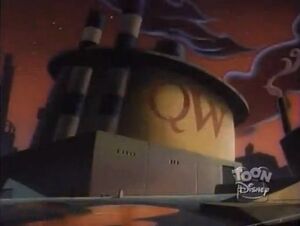 The Quackerware Corporation is the company that produces the popular Quackerware line of home products to store and serve food. It has a plant in St. Canard for the local salesmen, among which Herb Muddlefoot, Weasel Loman, and Thug Neanderthal. All salesmen have a key to get into the plant and restock.

The Quackerware Corporation is a well-established company probably around for a few decades by the time Darkwing Duck established himself in St. Canard. Herb Muddlefoot won the award for Salesman of the Year in their employ. Rather than stores, they operate through door-to-door salesmen. The salesmen are trained with a variety of slogans, some of which meant for them and some of which meant for the customers. "The Merchant of Menace"

Three salesman are known to work for the Quackerware Corporation. The aforementioned Herb Muddlefoot is their star salesman. Weasel Loman used to work for the company, but was let go for undefined misconduct. "The Merchant of Menace" Thug Neanderthal, an ex-con, became a salesman after participating in the Adopt-a-Con program and living with the Muddlefoots for a while. "Adopt-a-Con"

Steelbeak promises "a luxurious all-expenses-paid vacation for two and a special gift set of fine Quackerware" to the Eggman that captures Darkwing Duck and his crew after they've infiltrated the Iggy. "Trading Faces" There is a thieving Quackerware salesman operating throughout the country and all evidence points at Herb Muddlefoot. When confronted with this fact by SHUSH, Darkwing goes undercover as Herb's apprentice to protect him and find out what's behind the accusation. Unexpectedly to him, Herb turns out to be a lauded salesman and his enthusiasm gives Drake's mission a personal note. In addition to keeping Herb safe from Gryzlikoff, Drake resolves to make at least one sale. What neither Drake nor Herb know is that they are being watched by the real thief, Weasel Loman. He used to work for the Quackerware Corporation, but turned to a more profitable life of crime. He has invented a machine that gives a mind and legs to Quackerware products and its these minions he sells to steal his customers' possessions as soon as the coast is clear. He goes at his crimes disguised as Herb out of practicality and resentment. His one limitation is that he needs to have fresh supplies of Quackerware every so often, so when he sees Herb and Drake, he gets rid of the former by calling him, pretending to be an unsatisfied customer, and giving him an address way in the desert to visit. Herb leaves his Quackerware stock with Drake and Loman easily steals it from him. He takes the new material to his hideout to rework and paint golden so rich people will be persuaded to by it. He only gets to try his new technique at one house when Drake and Herb both show up and unmask him. When Gryzlikoff shows up too, Loman flees back to his hideout. Darkwing follows him there, but so does Herb, who gets captured. Loman takes the key to the Quackerware Plant from him and sics his minions on them before leaving to the plant, but Darkwing and Herb escape. They follow the villain and defeat him soundly, after which they hand him over to Gryzlikoff to deliver to prison. Herb, glad to have saved the company's good name, stays a little longer to clean up at the plant. "The Merchant of Menace" With the new line of Quackerware products in, Herb goes over to Drake's house to let his friend have a first shot at it. Drake, having a tremendous headache, buys stuff just so Herb will go away. At this time, the Muddlefoots have signed up for the Adopt-a-Con program and receive Thug Neanderthal in their house. Part of the program is that the criminal has to learn a new trade, so Herb teaches him to be a Quackerware salesman, which Thug takes well to. "Adopt-a-Con" The teachers and students of the Eldritch Academy of Enchantment and magicians in general keep their potions in Quackerware, which makes them everlasting. "Hot Spells" Herb promises Morgana Macawber to mention her restaurant and delicious dishes to all his Quackerware customers. He is convinced her business will become bigger than Hamburger Hippo. "Malice's Restaurant"