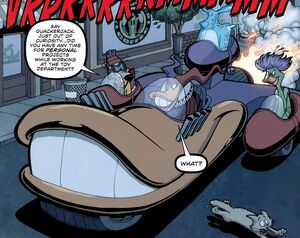 Quackerjack's Fearsome Four vehicle is a car-and-plane combo vehicle built by Quackerjack in preparation for the reunion of the Fearsome Four. That said, it is designed around him, being based on his appearance and with only small sideseats for his colleagues while the roomy control seat is reserved for himself. Its plane mode is an energy drain and is made so that it depends on Megavolt's presence on board.

Unable to function at his job at the Quackwerks Corporation and not over the loss of Mr. Banana Brain by a long shot, Quackerjack worked towards returning to his criminal life. Meaning to reunite the Fearsome Four, he created a vehicle with a seat for all of them. While a car by default, it has extendable wings to accommodate flight. The overall silhouette mimics the Thunderquack, but the design is personalized to Quackerjack's tastes. Its passenger space is divided in four parts, with a designated non-covered spot for each member of the Fearsome Four. Quackerjack himself is in the pilot compartment, Megavolt is assigned to the right seat which can drain his energy from him, Liquidator has the higher seat in the back to provide room for his water-based attacks, and the seat to the right is Bushroot's. Quackerjack also has built a miniature seat in the pilot compartment in memory of Mr. Banana Brain. After being used only once, the vehicle was confiscated by Quackwerks and, with the Fearsome Four in jail, probably remains in one of the company's hangars.

Quackerjack's vehicle pretty much replaced Negaduck's helicopter. The helicopter also has composition similarities to the Thunderquack and may have been a source of inspiration too.

Quackerjack uses the vehicle to get the Fearsome Four across St. Canard. One of their stops is Clint Wacky's Wacky Wonders, which they blow up. The Duck Knight Returns, part 2 When all of a sudden the Thunderquack appears in the sky, the Fearsome Four return to the car to pursue their old enemy. All set for the fight, Megavolt's mood takes a dive when he is tied down in his seat and essentially becomes a living battery for the vehicle's plane mode. With Quackerjack as pilot, that leaves Bushroot ad the Liquidator to take care of the long range attacks. The Fearsome Four have the upper hand for most of the aerial fight, but both parties are eventually captured by the crimebots of Quackwerks for illegal use of the St. Canardian sky. Both the Thunderquack and the Fearsome Four's vehicle are taken to a hangar owned by the company while the occupants are brought to the CEO's office. The Duck Knight Returns, part 3

Retrieved from "https://darkwingduck.fandom.com/wiki/Quackerjack%27s_Fearsome_Four_vehicle?oldid=21855"
Community content is available under CC-BY-SA unless otherwise noted.