"Whiffle While You Work"

Quackerjack used to be the owner of a toy company, Quackerjack Toys, until the competition killed his products. Especially the rise of videogames harmed Quackerjack Toys sales. This turn of events drove the toy maker mad and onto the criminal path, through which he could continue his company outside of rules and regulations. Quackerjack has three objectives now. The first is monetary gain, the second is to revive his brand, and the third is to crush the competition and erase videogames from existence. He has it out in particular for Whiffle Boy.

He is voiced by Michael Bell. He reprises his role in the DuckTales reboot.

He was once a toymaker who was run out of business after the "Whiffle Boy" video game market expanded. Understandably, he has a particular hatred of Whiffle Boy videogames and merchandise. He became a supervillain who robbed banks to get money to fund his toymaking ventures and uses his toys to aid him for his crimes in most episodes. However, he's a genius who has built many successful toys. His catchphrases are "It's playtime!" and "Playtime's over!"

Quackerjack has a doll named Mr. Banana Brain, whom he carries around and talks to. Generally, he adapts a high pitched voice to have the puppet talk back in rhyming form. Other dangerous toys used by Quackerjack are a gorilla robot which destroyed a "Whiffle Boy" warehouse before self-destructing; a giant Crying Chrissy doll with which he tried to unsuccessfully flood Whiffle Town, a pair of robot chattering teeth, an apathy causing toy called the relaxitron and his most fiendish torture device--a talking trivia doll which repeats useless historic facts endlessly over and over!

Most times Quackerjack works alone, but he has been known to team up with Megavolt, and was a member of the Fearsome Five.

Quackerjack is energetic and athletic, capable of performing perfect backflips and impressive leaps. In fact, his acrobatic affinity and use of lethal gadgets makes him a top tier villain.

Mad as a hatter, tailor, shoemaker and blacksmith put together. Childish, petty, delusional and prone to mood swings, Quackerjack is unstable and though usually in a jolly mood, this can quickly change if properly provoked. Despite this madness ,he is in possession of a keen intellect, though his jester -ike behavior contradicts this he is able to form semi-coherent plans and set them in motion.

His debut was in "Whiffle While You Work," in which he first met Darkwing (though he seemed to know him from somewhere, Darkwing didn't know him) and their rivalry was established.

In "Days of Blunder," he drove Darkwing Duck into losing his confidence by impersonating a psychiatrist by the name of "Dr. Leopold Loon" with a German accent and switching his and Meekles's tests results. With Darkwing Duck out of the way, he managed to pull of the heist, robbing the box office of $10,000,000 with the aid of his robot Teddy henchmen; he even managed to overpower Mr. Meekles (The Lavender Wrist Slapper), knock out Launchpad and kidnap Darkwing Duck's young daughter, Gosalyn.

In "Toys Czar Us," he forced the manager of a toy store to stock shelves with his personal brand of fun, despite protest. He also kidnapped Gosalyn again, along with the other children who were cast in a school play and forced them to build his toys.

As a member of the Fearsome Five, Quackerjack appeared in the episode "Just Us Justice Ducks." In a fight with Gizmoduck, it is revealed Quackerjack has false teeth (though this may have likely been a gag).

A friendly, more gentle Quackerjack is seen as one of the members of the "Friendly Four" in "Life, the Negaverse and Everything." He's still insane but more docile and actually has somewhat of a conscience, being he still makes toy weaponry but only to use against Negaduck while he gives normal toys to children. He, along the other Friendly Four, managed to defeat the evil Muddlefoots and now a caretaker of the Negaverse's Gosalyn.

In "Quack of Ages", he went back in time using his Time Top to eliminate the very first yo-yo. He accused Darkwing Duck as a warlock. This ended in his accidental aiding of the invention of the yo-yo, thanks to Darkwing.

In "Stressed to Kill," Quackerjack teamed up with Megavolt again, and, using a toy called Mr. Relaxatron, the two had the city in an apathetic daze as they robbed it blind and caused mass mayhem. Throughout the episode, he constantly annoys Megavolt by calling him "Sparky".

In "Time and Punishment," he used the top to travel into the future with Megavolt to discover more advanced toys. Thanks to an accidental kidnapping of Gosalyn, he turned Darkwing into the revenge-crazed DarkWarrior Duck.

In "The Haunting of Mr. Banana Brain," he stole a haunted jack-in-the-box that contained a demonic entity named Paddywhack, who possessed his doll for a little while, and feeds on the emotion of suffering that he causes others. Quackerjack noticed a change in the voice of his doll, but was unsurprised that the doll was moving and talking under its own power. In the episode, he was forced to team up with Darkwing Duck in order to get rid of Paddywhack, or submit to eternal torment specifically designed by Paddywhack with Quackerjack in mind: Paddywhack would force Quackerjack to adopt "normal" modes of behavior. This was raucously characterized by the depiction of Quackerjack dressed in a business suit.

He briefly appeared as a Fearsome Five member again in the episode "Jail Bird." When Negaduck stole the powers of the other four members, he took Quackerjack's wackiness because he has no powers.

Quackerjack is among the villains Darkwing dreams up during a period of low crime. In the dream, he is defeated by a giant Morgana Macawber. "Ghoul of My Dreams"

While trying to teach Comet Guy to be a villain, Darkwing brings up Quackerjack as an example of what he should strive to be like. "Planet of the Capes"

Quackerjack puts money together with Liquidator, Bushroot, Megavolt, Steelbeak, Tuskerninni, and Moliarty to watch the Miss Corn Fritters Pageant on pay-per-view. Their session is temporarily disrupted by Darkwing Duck, who suspects that they are involved in the abduction of Fluffy. However, Darkwing also meant to watch the pageant and readily agrees to pay ten bucks to get to watch along. Some hours later, the pageant finishes and everyone gets back to business, which for the villains means attacking Darkwing Duck. Quackerjack attacks Launchpad, but he gets away and Tuskerninni trips into his colleagues, knocking them out cold. Darkwing calls the cops on them and they are all hauled off to jail, even though they had nothing to do with Fluffy's disappearance. "The Kitty Kat Kaper" Because Quackerjack is one of the many clients of the villain costume designer who refuse to pay him properly for his work, he includes his outfit among his super-starch-powered costume army. "Vogue's Gallery" 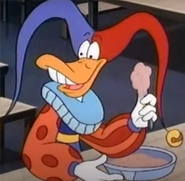 Quackerjack in the hour-long DuckTales special, Let's Get Dangerous!. 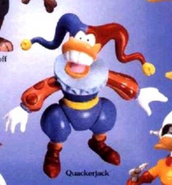