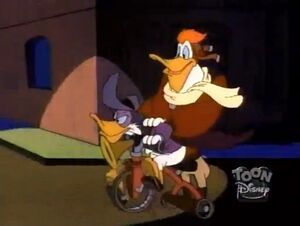 The Quack Cycle is a tricycle Darkwing Duck uses when his more convenient vehicles are out of order. It's got a large claxon and is relatively slow, but it gets him where he needs to.

It's possible the Quack Cycle is an item Darkwing kept from his childhood days when he set the first steps on the path of superhero. But he also might've bought it later on as cheap backup to the Ratcatcher. Either way, it does not see much use since Darkwing became a superhero of name.

After Gosalyn and Honker have taken parts of the Ratcatcher to recycle, Darkwing and Launchpad are forced to make their way to the Museum of Really Expensive Things with the Quack Cycle. Only once at the scene of the crime do they realize the Quack Cycle does not have brakes and crash, wrecking the tricycle. "Dirtysomething"

Retrieved from "https://darkwingduck.fandom.com/wiki/Quack_Cycle?oldid=13873"
Community content is available under CC-BY-SA unless otherwise noted.