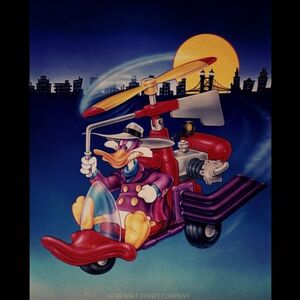 The Quack Copter is a one-man mini-helicopter owned by Darkwing Duck. Its wheels suggest it is a hybrid vessel that is useable on roads too.

Retrieved from "https://darkwingduck.fandom.com/wiki/Quack_Copter?oldid=23899"
Community content is available under CC-BY-SA unless otherwise noted.