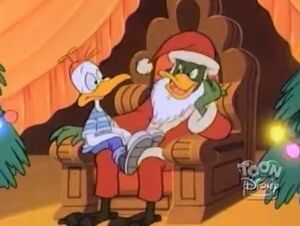 The propeller beanie boy is a child living in St. Canard.

He is probably around ten years old.

When everyone thinks Launchpad McQuack is Darkwing Duck and people try to profit off of it by setting up a small Darkwing-themed market in his yard, the propeller beanie boy visits a balloon stand and a food stand. He's at the latter when Drake angrily chases everyone away. A Duck by Any Other Name The boy visits the set of Space Duck: Attack of the Teenage Mutant Martian Mallards, Part 12 when a scene is shot in the streets of St. Canard. Darkwing's sudden arrival chases him off along with most of the audience. Hush, Hush Sweet Charlatan The The Cute Little Lost Bunnies movie is in theaters and the propeller beanie boy opts to watch it on the same night as negatron-Darkwing happens to be on the loose. The negatron-composed menace practically sits in front of him and behaves rudely until he goes so far as to get out a gun and a tank. The boy wisely flees, but remains in the general vicinity to "rip apart" the villain on orders of one of the bunnies. Negaduck Slaves to Fashion The propeller beanie boy is the first kid to get on Santa's lap at the mall when Santa has just been abducted and replaced by a dressed-up Bushroot. The boy asks for a drum, so Bushroot, out to ruin Christmas, tells him to "beat it" and has one of his Christmas trees throw the boy out. It's a Wonderful Leaf The propeller beanie boy attends a comic book convention and manages to get an autograph from Quiverwing Quack. Paint Misbehavin'

Retrieved from "https://darkwingduck.fandom.com/wiki/Propeller_beanie_boy?oldid=20772"
Community content is available under CC-BY-SA unless otherwise noted.