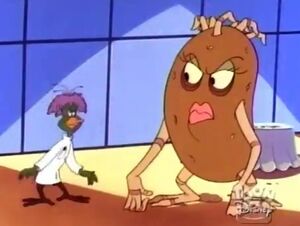 Posey is a mutant vampire potato who was meant to be a mutant flower instead and was grown by Bushroot to become his life partner. Although surprisingly tolerant of him, Posey had her own plans and escaped his greenhouse to terrorize the countryside. Posey's vampiric traits make her seek out people and attack them, the result of which isn't their death but their enthrallment into chips-eating couch potatoes. She is also capable of growing out her roots to use as prehensile extensions would a victim make a run for it. Her rampage ended when she was de-mutated thanks to an anti-vampire potato ritual talked about in the countryside folklore. 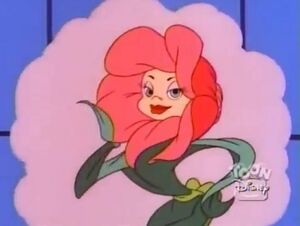 The reason a potato mutant carries the name Posey is that that is what she was supposed to be as per her creator's, Bushroot's, designs: a flower mutant. The snag in her genesis is Spike, who dropped the jar of posey blossom and replaced it with potato starch. That she came out as a towering vampiric entity might be traced back to Bushroot's decision to use all the "posey blossom" in the hopes of it making his creation ultra-feminine. The other two ingredients that went into Posey's creation are, not counting the soil Bushroot picked for his experiment, fertilizer and fluoride. It has not been established what level of sapience Posey possesses. Bushroot was aiming to make an equal and there's no reason Posey would be any less, but she appears to be more instinctually driven. She also exclusively communicates in growls, which Bushroot may or may not understand.

Posey is highly aggressive, but only so against flesh-based beings. Some growling aside, she didn't lift a finger against Bushroot or Spike until the former accidentally drove a ride-on mower in her face. Flesh-based beings do not get this level of patience. It doesn't matter who they are or what they are doing, if Posey can, she will attack them and through an unknown process potato-zombify them. Any thrall of hers gets weird eyes and grows roots out of their head. They are compelled to sit down in front of the nearest television set and consume potato-based food products, such as chips. The only known way to cure them is to defeat Posey and break her control. And the only known way to do that is to sprinkle her with the pollen of a Lyceum Nycanthropus plant, which Bushroot coincidentally is, while chanting "potato backwards". This turns her back into a regular potato.

As per Duane's words, Posey is not one of a kind. Other vampire potatoes do exist or have once existed. The method to defeat a creature like Posey is part of the folklore local to the St. Canard outskirts. Duane further identified Posey as a russet, a type of potato that is inherently evil.

Posey is as mean as they come. Whatever her end goals are, provided she has them in the first place, she pursues them ruthlessly, creating thralls by means of open and stealth attacks. Reasoning with Posey is out of the question, no matter who attempts to do so. At the very least she is not inclined to act on hostility towards other plants, although this could be solely because they aren't prey material and therefore a waste of time to take a swipe at.

"She's a potato," about sums up Posey; a potato the size of an elaborate phonebooth, with fangs, prehensile extendable roots, makeup, and a persistent scowl. Like other plant mutants, she goes about her day without clothes, but for a while wore the rags of the dress Bushroot gave her.

Tired of being rejected as a romantic partner just because he's part plant, Bushroot resolves to grow his own life companion. He has Spike assist him in the endeavor.

Posey turns Launchpad, Herb and Binkie and Tank into zombies. The potato is then defeated when Darkwing follows advice from Duane. "Night of the Living Spud"