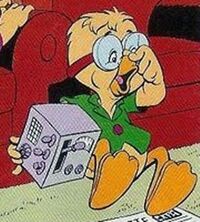 A portable black hole is a cube capable of generating a black hole. It's recommended equipment among the Young Astronomers Club.

Portable black holes are common gadgets even entrusted to children, provided they've got some understanding of astronomy.

Honker agrees to join Gosalyn to the 3-D World to save Darkwing and Launchpad, but first he goes home to fetch his portable black hole in case it might prove useful. It doesn't take long for them to find the adults and Darkwing, who has used the 3-D World's powers to read a few pages ahead, asks Honker to set up the portable black hole. Once ready, Darkwing calls for the 3-D Man with various insults to provoke him to show himself. As soon as he does, Honker activates the black hole. The 3-D Man is sucked in, but the heroes save themselves by holding on to the panel borders until the 3-D World disappears with the black hole. Son of the Return of the Revenge of the 3-D Man

Retrieved from "https://darkwingduck.fandom.com/wiki/Portable_black_hole?oldid=18531"
Community content is available under CC-BY-SA unless otherwise noted.