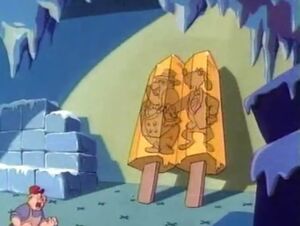 The popsicle agents are two field operatives employed by SHUSH who met their untimely demise at the Tasty Duck yoghurt factory. Their death was orchestrated by Phineas Sharp.

Regarded as some of SHUSH's finest, the agents were included in the master list of SHUSH agents, which proved their undoing. While entrusted to investigate a smuggling ring thought to be operating from the Tasty Duck yoghurt factory, they were murdered on orders of Phineas Sharp, possibly by his henchmen.

The agents are dedicated to their jobs at SHUSH.

One of the agents is a dog dressed in a suit and accessorized with tie and sunglasses. The other is either a dog or a guinea pig. He too wears a suit, but he accessorizes with a bow tie and hat.

The two agents are investigating a smuggling ring at the Tasty Duck yoghurt factory when they are targeted by Phineas Sharp, who needs them dead to prove to SHUSH he has acquired the list of their agents. They are frozen into two bars of banana ripple delight and are found in this state at 05:00 by a freezer maintenance worker. Their deaths are the final straw that prompts J. Gander Hooter to put Derek Blunt and Darkwing Duck on the case. "In Like Blunt"