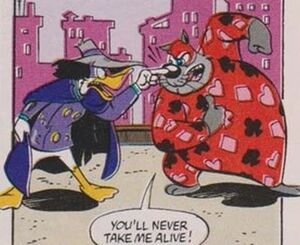 Pokerface is not a recent face in the St. Canardian crime scene, but it is one with only recent recognition value. Pokerface is one of the few among many lowtime crooks roaming the streets of the city who managed to raise himself to higher ground. He has specialized himself in gambling and gambling-related crimes, in particular if playing cards are involved. He's the owner of One Chump Plaza Casino, a casino that enjoys decent popularity among the population of St. Canard, and the boss of the Suits. Next to wagering, Pokerface's favorite activity is talking about himself and his successes as of late.

It isn't long ago that Pokerface was a street level crook barely getting by with the money he made change pockets. He had dreams of a more glamorous lifestyle and enjoyed emulating the higher-up criminals known and feared throughout St. Canard.

Being someone who can only consider himself a criminal of name as of late, Pokerface still revels in the realization he's big now. As is, the status of being a major villain means more to him than the other benefits that can come from it.

Pokerface is a large, rotund cat with grey fur and blue eyes. He goes dressed in a red mask and a red pyjama-like suit with card suit symbols plastered all over. He does not wear any shoes.

Pokerface has the city controller of St. Canard murdered to get his hands on the maps to the city's water supply system. He means to poison the water supply to One Chump Plaza Casino with gambleholic toxin so that his patrons will wager their entire fortune away. A mistake in the plan is that a business card is accidentally left behind at the crime scene, putting Darkwing Duck on his trail. When the crimefighter crashes his office, he sics the Suits on him and Launchpad McQuack. With the two bound, Pokerface is eager to share his master plan, but Darkwing wants to hear nothing of it, having grown weary from all the villains he's met that want to talk about themselves. Not one to be denied his boasting, Pokerface puts the two heroes on a conveyors belt for cutting playing cards and tells them about his scheme while they are on their way to their doom. After his exposition, he leaves with the Suits to the water tower he needs to be at, but his monologuing gives Darkwing and Launchpad, who have escaped the death trap, time to catch up. He sics the Suits on them once more, but Darkwing defeats them one by one. Due to having fallen victim to the gambleholic toxin himself, Darkwing never gets around to defeating Pokerface. Instead, they end up playing poker for their costumes, with Pokerface winning each round until the cops come take him away. Feeling Flushed

Retrieved from "https://darkwingduck.fandom.com/wiki/Pokerface?oldid=20658"
Community content is available under CC-BY-SA unless otherwise noted.