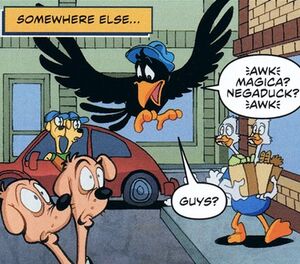 Poe De Spell is the brother and familiar of the sorceress Magica De Spell. Prior to their involvement with the inhabitants of Duckburg, he was changed from a anthropomorphic animal to a non-anthropomorphic raven and a counterspell has so far eluded him.

He is voiced alternately by Terence McGovern and Frank Welker. In the reboot, he was voiced by Martin Freeman before his transformation.

Poe is the brother of Magica and possibly the father of Minima De Spell. Who the oldest is between him and Magica is unknown, as is how Poe ended up as a raven. After his transformation, he signed up as Magica's familiar and the sorceress has been on-and-off looking for a cure for her brother since. The Number One Dime is one of the suspected ingredients to a cure. "DuckTales"

In general, Poe is loyal to Magica, but keeps away from her schemes and any drawbacks unless she orders him into action. "DuckTales"

Poe was presumably a duck before his transformation. As a raven, he wears nothing but a fedora. In the reboot, he was Magica's twin brother before said transformation.

Poe accompanies Magica and Negaduck across the various alternative dimensions to collect Darkwings. They accidentally leave him in the dimension in which everyone has two heads. "Crisis on Infinite Darkwings, Part 1" He returns from the other dimension in one way or another and reunites with Magica. He is with her when she forms the League of Eve-il and finds the ink while searching for a good place to create a hideout underneath St. Canard. Poe is the first to get it on him and the personality change he undergoes due to it inspires Magica to build her scheme around the substance. "Dangerous Currency, Part 3"