The Phantom Blot is a villain originally created for the Mickey Mouse newspaper comic strip. He is a legendary criminal genius who has yet to be satisfied with the infamy he has raised for himself. Intel, money, resources, power, and the deaths of those who oppose him are goals subordinate to his aim to be known and remembered. To this end, he picks up whatever criminal activity that comes his way and seems worth his investment. His know-how is, however, best spent on large schemes. The Phantom Blot also isn't picky on his methods, but unnecessary bloodshed is not a first choice. He has the versatility to work alone and the civility to make allies. If neither cuts it, there's also his adaptness at mind games to garner unwitting pawns.

In the few appearances he has made in animation, he has been voiced by Frank Welker and John O'Hurley.

The Phantom Blot is a master criminal to whom few can compare, which is exactly what he wants. Whereas most high level crooks are such as a consequence of their work towards profitable goals like power or monetary gain, to the Phantom Blot his reputation is what drives him foremost and the optional more tangible spoils are the means. Next to getting his name immortalized in "the annals of crime", the Phantom has busied himself with smuggling, spy activity, world domination schemes, building superweapons, theft ranging from disposable cameras to top secret military aircrafts and even colors, and more. The Phantom Blot, however, does not kill or endanger unless a particular person is an obstacle he otherwise can't get rid of. This is due to the fact that, at least early in his career, the Phantom Blot had hemophobia that extended to him being unable to watch people die or suffer. Not one to be easily discouraged, the Phantom Blot became an expert in designing elaborate death traps that'd allow him to get far away before his victim would kick the bucket.

The Phantom Blot is good both as a hands-on criminal and as the mastermind behind a gang, as long as it gets him infamy. He's also open to team-ups with other villains and among others has schemed with Emil Eagle, Pete, the Beagle Boys, and the League of Eve-il. He is generally liked as a partner in crime for both his ability and his personality. One of his sporadic co-schemers, Mr. X, even regards the Phantom Blot as his only friend.

Depending on the sources, the Phantom Blot's parents are either dead or still around but he's broken contact with them. He may also have two brothers who are harmless civilians and a triplet of nephews who are more a nuisance than a danger. One source even sees him the father of a sweet little girl who adores him. Unofficially, she is known as the Phantom Brat. She dresses both herself and her toys in his image, but doesn't know her father is a wanted criminal. She is eventually left in the care of her father's housemaid, Ms. Fragmuffin, after her father goes to jail.

In addition to the aforementioned death trap expertise, the Phantom Blot possesses a wide range of skills to put to use. He is a versatile actor with many aliases, scientifically schooled in regards to physics, mechanics, and biology, artistically inclined with a focus on painting, and he has means to get whatever intel he wants. This includes personal and concurrent information. He is also a skillful hypnotist, but rarely has to use this ability because he is also a master manipulator. He takes a special delight in psychologically tinkering with ordinary civilians and having them act as his agents. Lastly, the Phantom Blot is a clever businessman who maintains operations on the legal side of the law that he finances with his ill-gotten gains. The steady wealth acquired from his enterprises in turn allows him to finance his ambitious plans time and time again.

Mickey Mouse is the Phantom Blot's primary opponent, but the latter has also faced and been beaten by Goofy, Donald Duck, Scrooge McDuck, Elvira Duck, and Darkwing Duck.

What makes the Phantom Blot such a dangerous adversary is his unpredictability. He may have one main goal in his career, to be feared and remembered, but his roads to getting there are abundant and the scale on which he operates is subject to his whims. Further complicating any attempt to thwart him is that he is a "master of all trades" who can work in secrecy for a very long time before making his unveiling move. The fact he just won't stay behind bars further means that he's a threat that can only be pushed back to square one, not eliminated. The one good thing that exists therein is that the Phantom Blot is a calculated individual who only acts within a larger plan and not because, say, he's been having a bad week. His objection to being immediately involved in fatal violence also makes the direct danger he poses less than it could've been. In fact, the Phantom Blot is downright pleasant company as long as he's got no reason to behave another way. He is sophisticated, patient, creative, has a good sense of humor, and can hold a conversation on numerous topics.

The Phantom Blot is a lanky dog with an oval head, a downwards-pointing nose, short black hair, and a thin moustache. His features are normally hidden beneath a black cloak that covers him head to toe. The look is finished with black shoes and black gloves. In this form, he is largely shapeless black figure with eyes peering out from two holes in his mask.

The Phantom Blot has taken control of Cat Island, an island containing one fishing village that works for Scrooge McDuck. The entire population has been put behind bars by the Phantom Blot, who is working on a long-term plan to steal a top secret military jet recently developed that has the ability to turn invisible. For this scheme, he has established an alliance with Ensign Plover, who is in a position that he'll be able to steal the jet during one of its first test flights. Plover fulfills his part of the scheme and gets the plane to the Phantom blot, but the Blot failed to adequately predict what precautions would have to be taken for the inevitable investigation by Scrooge. Scrooge manages to free himself, Launchpad, and the fishermen and together they defeat the villainous duo. "DuckTales"

Posing as a man named Bob, the Phantom Blot talks his way into a position as Constance Dention's confidante. He brings her into contact with the ink and is pleasantly surprised to find that rather than succumbing to it, she can control it. He becomes her campaign manager when she runs for the position of mayor, sharing her preference for dishonest tactics. To help her out, he also gets in contact with her opponents, Darkwing Duck and Launchpad McQuack. Introducing himself as a neutral communications expert, he gives them his ink-covered business card too and observes from afar as they fall victim to the amplification of their negative emotions towards each other. "Campaign Carnage, Part 3" In the end, it is not enough to make Suff-Rage come out victoriously, as her scheme is discovered. The Phantom Blot remains at a safe distance until it all is over. He is disappointed that Suff-Rage did not do better, but her ability was always a bonus and not crucial to the larger plan he and Magica De Spell have in store for St. Canard. Their research on the ink now complete, they are ready for Phase Two. "Campaign Carnage, Part 4"

The League of Eve-il has an ink-powered Megavolt and five ink-powered Beagle Boys attack Darkwing Tower for the Gizmosuit. Their other aim is to establish psychological control over their opponents as both Darkwing's team and Scrooge McDuck and his associates have gathered there. The ink users get the upper hand with ease and the League of Eve-il considers letting them finish the job then and there, but the Phantom Blot demands that they use the Gizmosuit to lure the main troublemakers to their headquarters inside St. Canard Tower. "Dangerous Currency, Part 1" No sooner said than done, Darkwing, Scrooge, Gyro Gearloose, and Little Helper come searching for the suit and the missing Fenton Crackshell. They are manipulated to Darkwing's old office space where Fenton as Gizmoduck is tied down. The entire villain collective shows itself then and unleashes the ink on their adversaries. Gizmoduck becomes a monster under its effect and attacks his comrades. The Fearsome Four get itchy to test their own new ink powers, but the Phantom Blot holds them back as this too is an experiment to see what behavioral change the ink can bring about. Annoyed, the Liquidator compares him to Negaduck. The limits of the ink are shown when Scrooge has Mrs. Crackshell brought over and her authority breaks the ink's control over Fenton. Displeased, the Phantom Blot sics the Fearsome Four on the heroes. "Dangerous Currency, Part 2" The group escapes and rejoins what's left of Launchpad's party to retreat to Gyro's workshop in Duckburg. The Phantom Blot wants to let them go so he can concentrate on experimenting further with St. Canard, but Magica demands they go after Scrooge and the Number One Dime. She ignores her colleague's argument that they have no experience in transporting the ink and reminds him she's the boss of the whole operation. As per her wishes, the villains move to Duckburg, where the Fearsome Four are tasked with defeating Darkwing Duck while the rest goes to take over the Money Bin to serve as their new headquarters. "Dangerous Currency, Part 3" In investigating the ink, Gyro and Honker discover its nature as the remains of Negaduck's body. The villain's consciousness is freed from the wasteland in the process. He takes control of the ink and incarcerates anyone within reach, making no distinction between villain or hero. The Phantom Blot solely gets a personal treatment as Negaduck, claiming to be a fan, notifies him of the fact he's not actually working voluntarily for Magica. Back when she proposed a team-up, he refused, so she used an ink-based potion on him to make him compliant. The Phantom Blot is furious at Magica, but grateful for the information. Around this time, the population of Duckburg begins resisting the ink. Negaduck finds himself in hot water, so the Phantom Blot proposes one giant ink-centered fusion of all villains present to help him out. Only Magica refuses. The Phantom Blot threatens her that if she walks now, he will concentrate all of his resources on making the rest of her life miserable. She relents and the fusion is formed. What no one but Morgana Macawber knows is that there's a spell on Negaduck that can entrap him once more when activated with "the truth". Darkwing accomplishes this, trapping not only Negaduck in the wasteland once more but also all the villains fused with him, ending the threat they once posed. "Dangerous Currency, Part 4" 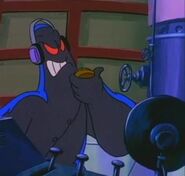 The Phantom Blot in DuckTales, voiced by Frank Welker. 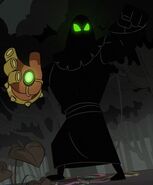 Te Phantom Blot in the 2017 series DuckTales.
Add a photo to this gallery

Retrieved from "https://darkwingduck.fandom.com/wiki/Phantom_Blot?oldid=27853"
Community content is available under CC-BY-SA unless otherwise noted.