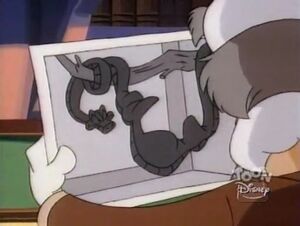 Perkins is an agent of SHUSH who met his untimely demise in the digestive system of a snake. His death was orchestrated by Phineas Sharp.

Regarded as one of SHUSH's finest, Perkins was included in the master list of SHUSH agents, which proved his undoing. While entrusted to investigate a case regarding the illegal import of exotic animals, he was fed to a snake on orders of Phineas Sharp, possibly by his henchmen.

Perkins is dedicated to his job at SHUSH.

There is nothing known about what Perkins looks like.

Perkins is investigating the illegal import of exotic animals when he is targeted by Phineas Sharp, who needs him dead to prove to SHUSH he has acquired the list of their agents. He is fed to a snake and his death is the first of four before SHUSH can take action. "In Like Blunt"

Community content is available under CC-BY-SA unless otherwise noted.