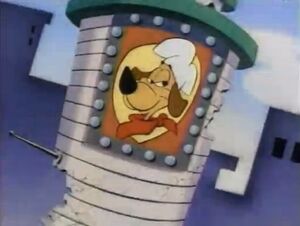 Pepe's Pizza is a company which home office is located in St. Canard. The company either manages a chain of restaurants or produces pizzas for retail.

Pepe's Pizza is a popular brand of pizza with an iconic tower office in St. Canard.

Still itching to be Public Enemy Number One once more, Negaduck gets himself a monster truck to pull down the Pepe's Pizza Tower. Darkwing and his team man the Thunderquack to pull the tower back up, and the force pulls the monster truck along against the tower. Falling debris smashes it to pieces, aggravating Negaduck to make his way to the tower's roof to deal with the heroes personally. It doesn't go as planned, so he jumps off the roof onto a flagpole to launch himself to a neighboring building's roof. Darkwing follows, but gets trapped. Quiverwing Quack and Arrow Kid use a rope to cross the gap but trip midway. Launchpad and Darkwing try to get to them from both sides, but this only makes it easier for Negaduck to take them all out at once. He cuts the rope, letting the heroes smack to the side of Pepe's Pizza Tower before they fall all the way down to its base. Darkwing improvises a pillow to break their fall just in time. The Quiverwing Quack

Retrieved from "https://darkwingduck.fandom.com/wiki/Pepe%27s_Pizza?oldid=14180"
Community content is available under CC-BY-SA unless otherwise noted.