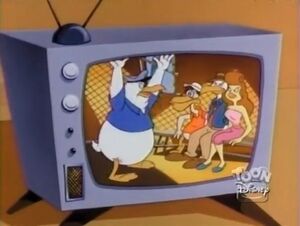 Pelican's Island is a sitcom with a large and loyal audience that will watch the reruns as eagerly as the new episodes. It consists of at least three seasons, one movie, and one television special. The protagonist is the titular Pelican, a bumbling but good-natured sailor, who is part of a group of people stuck on a tropical island. The plot consists of their attempts to get off the island and back to civilization.

Pelican's Island is an older show that has been running for a long time. Both reruns and new episodes are available to its audience, Battle of the Brainteasers as are television specials and movies. Presumably, not the entire material is in-continuity, as the horror movie Nightmare on Pelican's Island seems to be a stand-alone title. Tiff of the Titans Pelican's Island is usually a comedy show, which derives its humor from Pelican's bumbling, coconut jokes, the cast's inability to get off the island, Fraudcast News and horrific destruction. A Revolution in Home Appliances The cast consist of at least five characters: Pelican, Flipper, Barbara Ann, A Duck by Any Other Name Juniper, Tiff of the Titans and some other guy. Adopt-a-Con

In the Negaverse, Pelican's Island contains a lot more murder and shrunken heads. Life, the Negaverse and Everything

After thwarting a theft by Tuskerninni, Darkwing and Launchpad return home. Launchpad is glad to be back in time for Pelican's Island, with the episode airing in which Pelican tries to convince Flipper that Barbara Ann was abducted by a smelly big ape with large fangs. The episode is interrupted by a special news bulletin by Soft Copy: Tom Lockjaw reports on Darkwing's heroism earlier that night and also reveals his identity: Launchpad McQuack. Drake is both relieved and annoyed, but talks himself into a good mood by arguing no one watches reruns of Pelican's Island anyway. He is deeply mistaken. A Duck by Any Other Name Herb Muddlefoot is enjoying a rerun of the episode in which Pelican gets his and Flipper's head stuck in a combine harvester. When he wants to watch the new episode, his television set malfunctions, forcing him to repair. He takes the missed episode in stride and tries some more reruns, but those are interrupted by an announcement by Flarg that world domination is imminent. Battle of the Brainteasers Their television set is still giving them trouble when the Pelican's Island reunion special airs, so the Muddlefoots head over to the Mallard household to watch it with them. The Mallards, however, are dealing with a split-up Darkwing and need no audience. Gosalyn lends them the television set and food so they can watch the special at home. Negaduck Gosalyn and Honker are watching Nightmare on Pelican's Island and Pelican is just about to slice up Juniper with a machete when it's time for the commercial break. They stop watching when the adults return home, and resume the movie with Fenton Crackshell when he is their guest for the night. Pelican proceeds to chop up Flipper, because he's sick of being called "little buddy". Tiff of the Titans When Tuskerninni and his penguins get to live in the Mallard residence for a while as part of the Adopt-a-Con program, Launchpad and Gosalyn go watch an episode of Pelican's Island with him. Flipper is yelling at the others for neglecting their household tasks when a large reptile comes in and eats him. The whole episode reminds Tuskerninni of his time filming in the Amazon and coming face to face with a prehistoric nine-toed megasloth. Adopt-a-Con

Boatsmen illegally dump videotapes of the third season of Pelican's Island in the ocean because it's a terrible season. Neptunia tries to stop them, but a beanstalk with the St. Canard Police Station atop falls in her path and becomes priority. Just Us Justice Ducks, Part 1 It's Honker's ninth birthday and his parents have organized a Pelican's Island-themed birthday party for him. The Mallards are invited too, although Drake hates to go. At the party, Herb is dressed up like Flipper, Binkie's probably Juniper, and Drake is put in Pelican costume. He's offered coconut burgers and by then eager for any reason to escape the party. Launchpad returns with a sailor-themed peanut butter, honey and sauerkraut cake from the Sugar and Spice and Everything Nice Bakery and informs Drake he saw the Fearsome Four at the store. Drake trips up Tank so he lands into the cake and Drake can leave on the argument that he'll get a new one. The bakery turns out to actually be a cover for Negaduck's portal to the Negaverse and that's where Darkwing ends up. It is Nega-Honker's birthday too and the Muddlefoots mistake Darkwing for Negaduck and invite him. Their version of Pelican's Island is a lot more cannibalistic than the one Darkwing is familiar with, especially when they find out he's the imposter Negaduck warned for. They're about to grill him when the Friendly Four show up and save him. By training them to protect Nega-St. Canard more efficiently, Darkwing gets to return to his own universe, where he has a new appreciation for the Muddlefoots, Pelican's Island, and coconut burgers. Life, the Negaverse and Everything With Megavolt's gang of living electric devices defeated and returned to normal, Launchpad notes from the television set that they're just in time for a rerun of Pelican's Island. Gosalyn and Honker identify the episode as the one where Pelican gets hit on the head with a coconut and dreams that a submarine rescues the gang and then accidentally blows up the island with a nuclear torpedo. The three get some snacks and make themselves comfortable. A Revolution in Home Appliances When Beelzebub gets his hands on Darkwing's soul, he gets creative with the punishment: Darkwing is to watch Pelican's Island with demon versions of Herb and Binkie for eternity. Hot Spells An episode in which Pelican drops coconuts on Flipper is interrupted by a special news report on the Bugmaster by the Canard Copy. Launchpad is distraught because it seemed to him the cast was finally going to get off the island. Fraudcast News

Launchpad, Honker, and Gosalyn are watching an episode of Pelican's Island in which Pelican displeases Clipper by climbing into a tree. The episode is interrupted by a special news bulletin by Daphne Duckbill that Thirst-Buster turns those who drink it into a puddle of water. Liquid Diet

When Darkwing decides to stop crime-fighting after being shown up by the Super Power Union too many times, Launchpad tries to stir him back into action. Darkwing tells him to get out of the way, saying he's watching an episode of Pelican's Island he hasn't seen before and wants to see if the castaways get rescued this time. Launchpad says he's talking crazy and shuts off the TV. Super Union Blues

Orange Is the New Purple A Midsummer Gnat's Spree

Retrieved from "https://darkwingduck.fandom.com/wiki/Pelican%27s_Island?oldid=22375"
Community content is available under CC-BY-SA unless otherwise noted.