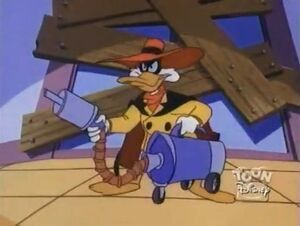 Particle accelerators are devices that increase the speed of particles. They are useful for a number of tasks, but are limited in their versatility by usually being stuck in one spot. Portable versions are still rare, but a promising step forward.

Particle accelerators do just that: they accelerate particles. The effect on non-living objects is that they lose their structure and fall apart. On living targets, the effect is rather different. Living beings gain superspeed, but at the cost of aging excessively too. The aging can be undone by retracing one's steps since gaining superspeed, and going further allows one to become even younger than the age at which one was hit with the accelerator's ray. Either a second hit or a stronger one causes rapid aging even if the target remains standing still. It is possible particle accelerators themselves have no reverse function, meaning they can't take the superspeed away from a person. Any cure has to be created through other means; fortunately, Darkwing developed such a cure thanks to his thought processes being sped up too.

Negaduck has stolen the first portable particle accelerator, which he uses to break through vault doors of banks. During his first heist, Darkwing Duck shows up to stop him. Negaduck blasts him with the accelerator's ray, causing him to ricochet through the building. In the next few hours, Darkwing develops superspeed. Negaduck hates that he gave his enemy a superpower, but his anger turns into mirth when a side-effect is discovered: Darkwing now ages rapidly too. With the portable particle accelerator at his side and Darkwing out of the loop, Negaduck robs banks freely until he decides to go bigger and threaten the population of St. Canard into giving him protection money. Launchpad, Gosalyn, and Honker try to defeat him themselves, but Negaduck captures them and locks them up in a giant running wheel. Aiming the accelerator at them, he makes an infomercial out of their excercise to show what will happen if people resist his orders. Even with a foot in the grave, Darkwing comes to rescue them and is advised by Honker to try moving backwards to de-age. It works, and Darkwing intercepts Negaduck outside. The villain is disappointed, but as he still has the particle accelerator with him, he simply blasts Darkwing again. This time, Darkwing ages on the spot, but his brain works faster too. His superspeed allows him to escape and develop a cure for his mutation before anyone even notices that he's gone. Back to normal, he gets to defeat Negaduck with the element of surprise. Going Nowhere Fast After seemingly destroying the frequency fiends, Megavolt notes that there's a minor but nonetheless existing chance that they could reform through a television set upon being hit by a particle accelerator. The fiends, who aren't nearly as gone as hoped for, know this too. The Frequency Fiends There's a particle accelerator unit in the lightbulb death machine Megavolt has built to deal with his high school tormentors. Clash Reunion

Retrieved from "https://darkwingduck.fandom.com/wiki/Particle_accelerator?oldid=15956"
Community content is available under CC-BY-SA unless otherwise noted.