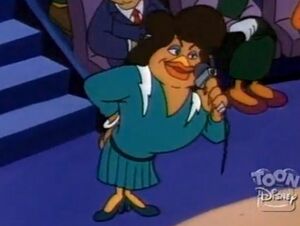 Opal Windbag, also known as Oprah Webfeet, is a talk show host of considerable fame. It's an accomplishment to be on her show, which is appropriately called The Opal Windbag Show.

She is voiced by Tress MacNeille.

The first name on the list of talk show hosts is Opal Windbag. No one can compare to her in terms of influence, which makes it a moment of pride for many to be on her show or the topic of her show. Fenton Crackshell has been a guest during his Pep days "DuckTales" and Megavolt possibly would get a seat if he'd manage to kill Darkwing Duck. "Dead Duck" Windbag has also spoken at length about Gizmoduck and his secret identity once. "DuckTales"

Windbag can be pushy in trying to get her story, but she cares about the comfort of her guests, regardless of why they are on her show. "Dead Duck"

Windbag is a bird with brown feathers and black hair. She's tall and portly and wears dresses with lightning bolt design on them.

In light of Megavolt's murder of Darkwing Duck and the popularity he's garnered for it, Windbag invites him to The Opal Windbag Show for the topic "Supervillains Who Killed Crimefighters and The Agents Who Represent Them". Megavolt's happy to be on the show and eagerly talks about his fame, income improvements, and the book he's written. The interview is interrupted by the arrival of Gosalyn Mallard, who wants to see Megavolt in jail for killing Darkwing. Windbag tries to get rid of her but fails and Megavolt gets annoyed when she urges people to get a refund on his book, so he abducts Gosalyn on camera to kill her next. Then it turns out to be all a dream. "Dead Duck" Some time later, Megavolt hops through television channels and for a while occupies a seat in The Opal Windbag Show when the topic is "Supervillains and The Women Who Love Them". "Twitching Channels"