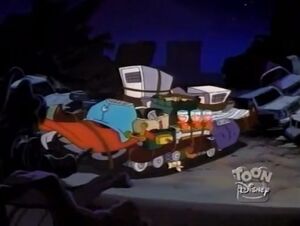 The Nutquacker is a makeshift tank constructed from garbage on a tight deadline. Though it might not sound like much, it's a design by Darkwing Duck and Honker Muddlefoot and it did what it had to do.

The Nutquacker was an emergency weapon-and-vehicle built to make up for the unavailability of the Ratcatcher, the Thunderquack, the gas gun, and about everything else Darkwing Duck usually has at his disposal. It has therefore not seen use since Darwking got his stuff back, but whether it is trashed or kept as a memento is unknown.

After Gosalyn and Honker have taken all of Darkwing's equipment to recycle, the latter is forced to get creative in his mission to stop Ammonia Pine and Ample Grime. Along with the two children and Launchpad, he has the Nutquacker built from materials they find at the dump. The Nutquacker is no beauty, but it works in blocking the villains' vehicle and fighting back against it. Dirtysomething

Retrieved from "https://darkwingduck.fandom.com/wiki/Nutquacker?oldid=13702"
Community content is available under CC-BY-SA unless otherwise noted.