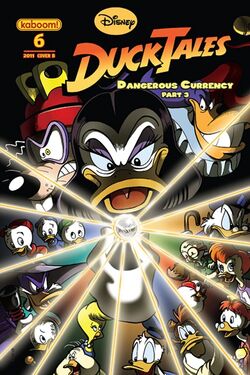 The Number One Dime is the center piece of Scrooge McDuck's fortune. It is an ordinary if antique American dime, but stands out as the first coin Scrooge earned with his own labor. It signifies the start of his journey to becoming the richest man on Earth and holds deep sentimental value to Scrooge. It is this sentimental value that gives the coin magical value, which is why it is an object of interest to Magica De Spell.

The year of production of the Number One Dime depends on the sources, some claiming 1899 and others 1875. Scrooge McDuck earned it with cleaning shoes in 1877 at the age of ten and kept onto it as a reminder of his goal to become rich. Since obtaining his Money Bin in Duckburg, the Number One Dime has had a place under a glass dome in Scrooge's office. Ignorant family and employees aside, it's been there safely until Magica De Spell discovered its existence one day and set out to obtain the fortune-infused coin. What for depends on the source: in some cases, she wants the Number One Dime to make an amulet that'll grand her power, and in others, she needs it to cure her brother, Poe De Spell, from his enchanted state as a raven.

During the rise of the Quackwerks Corporation, Magica De Spell saves Negaduck from the crimebots with the intent that they form an alliance. His benefit will be payback on Darkwing Duck and the company, while her benefit will be access to Launchpad McQuack and through him the Number One Dime. Negaduck is less than impressed with Magica's goals, but he has no reason to refuse. Crisis on Infinite Darkwings, Part 1 Their fragile alliance therefore is built on continuous reminders of what they are after. Crisis on Infinite Darkwings, Part 2 In the end, Magica does not get what she wants because her and Negaduck's headquarters in the abandoned portion of the subway are compromised by Darkwing in the company of Morgana Macawber and Gosalyn Mallard instead of Launchpad. Crisis on Infinite Darkwings, Part 3 Magica battles Morgana using the source absorber against her. This way, she gains her opponent's magical potential. Delighted by her increasing power, Magica declares she will abandon her old plan and simply make the Number One Dime come to her. That's when Quiverwing Duck thwarts her plans by shooting the source absorber out of her hand. A follow-up arrival by Paddywhack complicates the situation further that all in the headquarters have to flee to the surface. Launchpad awaits them there and Magica tries a last time to get him under her control before a fusion of Negaduck and Paddywhack changes the priorities of everyone present. Crisis on Infinite Darkwings, Part 4 Magica's next scheme to get her hands on the Number One Dime involves the ink and a teamup with many other villains. As a bonus, she uses a time candle to travel back to a year in the past to abduct Fenton Crackshell so he can authenticate the coin for her once she gets it. The alliance gets control over the entirety of St. Canard, but Magica demands to follow the escaping heroes to Duckburg to get her hands on her prize regardless of what her allies wish to do. Magica does manage to make the Money Bin her territory, but she is defeated before she can lay claim on the Number One Dime. Dangerous Currency, Part 3

Retrieved from "https://darkwingduck.fandom.com/wiki/Number_One_Dime?oldid=25294"
Community content is available under CC-BY-SA unless otherwise noted.