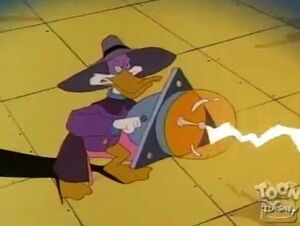 The norma ray is a device created for SHUSH by Sara Bellum during an arms race with F.O.W.L. for agents with psychic powers. The norm ray bombards the brain with norma particles, giving the individual touched by its beam a variety of mental abilities, such as futuresight and cryokinesis. It is the cause of Flygirl's and Hotshot's boost to supervillainy.

Always looking for new angles to approach global domination with, F.O.W.L. set up a Psychic Division in hopes of adding psychic powers to its arsenal. Responsiblity of the Psychic Division was given to the soldier Major Synapse. In response, SHUSH set up its own research, but instead assigned the project to a scientist, Sara Bellum. She created the norma ray, a device that generates norma particles and beams them at a target to induce psychic powers. Four different powers have been established: telekinesis, pyrokinesis, cryokinesis, and clairvoyance. There are also two negatives to the procedure and they are significant. The first is that while being exposed to the norma ray, the individual should not think. If they do, their head will rapidly expand and explode. The second is a consequence of being treated with the norma ray: with the psychic powers comes a gradually expanding head. If the risk of head explosion and consequence of head expansion are related, thus leading to the same outcome, is unclear.

An individual who has exploded is, however, not dead. As demonstrated by Wayne, after a while the victim implodes back to existence. Heavy Mental Major Synapse, another victim, has also returned from his exploded state. Orange Is the New Purple, Part 1 Whether they respectively received or kept their psychic powers upon returning is unknown. In Synapse's case, his explosion cleared Launchpad from any psychic powers and brough his head back to its normal size. The only test subjects who have not displayed any side-effects from the norma ray are Flygirl and Hotshot, who were uniquely blasted together. The psychic powers induced were split between them, possibly accounting for their stability. Heavy Mental

The short time F.O.W.L. had their hands on the norma ray may have been an inspiration to the creation of the maybeam.

Inside a secret SHUSH lab in the Swiss Alps, Sara Bellum has just finished her work on the norma ray, a device capable of granting psychic powers to anyone exposed to it. It is in SHUSH's interest to have a device like that before F.O.W.L. does and all that Bellum is left to do is find a test subject. Launchpad volunteers, being undaunted by the risk of his head exploding. He comes out fine and Bellum takes him along for some tests to check for psychic powers. Launchpad fails the design of every single test, but unnoticed by anyone he does perform the requested tasks on a larger scale outside the lab's walls. Bellum thinks she has failed and returns of tinker with the ray, after which she experiments with it on a reptile named Wayne. He thinks, so his head explodes. Fate's repercussion for her work is that Major Synapse, head of F.O.W.L.'s Psychic Division, has picked up on the norma ray's signal and has tracked it to its source. Just as Bellum muses that she needs more human test subjects, he walks in and offer his two underlings. Bellum is unaware they are with F.O.W.L. and takes them up on it, blasting the underlings concurrently. They become Flygirl, who can move objects with her mind, and Hotshot, who has control over thermal energy. Bellum tries to stop them when she realizes her error, but she is no match and the norma ray is stolen. The norma ray is kept by Major Synapse until his underlings are defeated by the joint forces of Launchpad, Darkwing, and Gosalyn. Then he uses it to blast himself long enough to become a giant floating brain with immense psychic power. Reminded of the stipulation not to think while being exposed to norma particles by Launchpad, Darkwing's team does the only thing left to do: aim the norma ray at Major Synapse while barraging him with questions to force him to think. He explodes and the norma ray is secured. Heavy Mental Bellum retrieves her invention and takes it with her when she relocates to the garage headquarters in St. Canard. Paraducks

Retrieved from "https://darkwingduck.fandom.com/wiki/Norma_ray?oldid=21700"
Community content is available under CC-BY-SA unless otherwise noted.