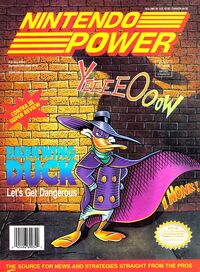 Nintendo Power was a monthly magazine published by Nintendo of America from 1988 to 2007 and by Future US from 2007 to 2012, ending suddenly on issue #285. It contained news and strategy advice for all games released on Nintendo platforms and was one of the longest running video game magazines in North America. During its run, it covered several Disney-licensed games, such as DuckTales, which even received a Nintendo Player's Guide entry, and Darkwing Duck.

Darkwing Duck for the NES received eight pages (8-15) in and the cover of Nintendo Power #36 as that issue's main attraction. The eight pages contain a complete walkthrough of the game illustrated with screenshots and game-none-specific artwork. The guide is narratively detailed and thorough on gameplay, but makes a few terminological mistakes such as calling Moliarty "Moriarty" and Wolfduck "Wolfman Duck".

Retrieved from "https://darkwingduck.fandom.com/wiki/Nintendo_Power?oldid=20108"
Community content is available under CC-BY-SA unless otherwise noted.