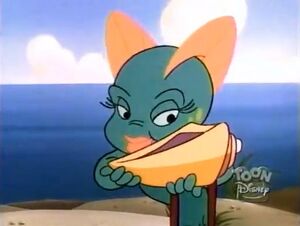 Neptunia's trumpet is Neptunia's main tool in commanding her troops. It is an instrument fashioned from a large shell that she uses to get her orders out over greater distances than her voice can carry or to multiple allies at once.

Being a fair fighter on her own but limited to being only one person, Neptunia has little need for weapons compared to equipment with which she can organize her troops. This is where the trumpet comes in, which Neptunia always carries with her on her back. It can produce a wide variety of sounds to communicate various orders to various and multiple forms of fellow ocean life, and the sounds carry farther than Neptunia could shout. "Something Fishy"

Once Neptunia considers the attack on the beach sufficient, she calls back the crabs, whale, and Billy with her trumpet. The attack, however, puts Darkwing Duck on her trail and she regularly has to call on her soldiers to get or keep him away from her. Darkwing comes to understand the value of the trumpet and sets out in his submarine to record its sound so that he can command her whale to unclog the river mouth that is causing a flood in St. Canard. Launchpad accidentally plays the sound before they get out of Neptunia's vicinity and she attacks them. During the fight, Darkwing breaks her trumpet with his gas gun, leaving her at his mercy but the city still at hers. Neptunia agrees to cancel her master plan after Launchpad begs her to, but without trumpet she can't call the whale. Darkwing mentions the recording left in the submarine and Neptunia dives to it to give the whale new instructions. For her help, and because she wasn't entirely wrong, Darkwing finds her a new shell to use as trumpet, pleasing Neptunia greatly. "Something Fishy" Neptunia uses the trumpet to call Hal when she spots a boat dumping videotapes of Pelican's Island Season 3 into Audubon Bay, "Just Us Justice Ducks, Part 1" and later to startle the Liquidator into listening to her orders to get lost. "Just Us Justice Ducks, Part 2"

Retrieved from "https://darkwingduck.fandom.com/wiki/Neptunia%27s_trumpet?oldid=19686"
Community content is available under CC-BY-SA unless otherwise noted.