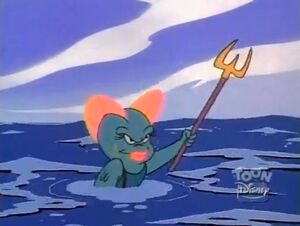 Neptunia's trident is a weapon Neptunia owns but rarely uses.

Neptunia acquired herself a trident some time after taking a milder approach at pollution and St. Canard. Since she never uses it against anyone, preferring her fists, it might be more a symbol of authority than a true weapon.

At first, Neptunia means to use her trident against polluters of Audubon Bay, but when the St. Canard Police Station atop a giant beanstalk falls onto her path, she uses her trident to drag the cops still inside to shore. The same tactic is required once more to save several soldiers from drowning under Audubon Bay Bridge, which is broken apart by a large forcefield encircling St. Canard. Just Us Justice Ducks, Part 1

Retrieved from "https://darkwingduck.fandom.com/wiki/Neptunia%27s_trident?oldid=21796"
Community content is available under CC-BY-SA unless otherwise noted.