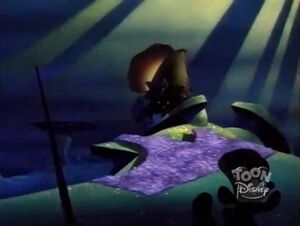 Neptunia's base is a structure located at the bottom of the ocean, just past the river mouth leading from St. Canard. It greatly resembles (or might possibly be) a large Conch shell. It is a rather dualistic edifice, being luxurious on one hand and filled with garbage on another. Additionally, despite being on the ocean floor and home to Neptunia, a creature who is principally a fish, an air supply is present to accommodate visitors, whether they be Neptunia’s guests or her captives.

The base’s history is unknown, though Neptunia presumably became its occupant some time after her mutation. It appears to rest on a large bed of jagged rocks, and has a spacious interior that is decorated with large shells and coral. Many chambers are filled with air and alternate walkways with waterways. This way, both land-dwellers and (small) ocean-dwellers can enter and leave while the humidity is comfortable for Neptunia to function in. Besides functioning as her living space, the base also is a collection spot for waste from the surface. Neptunia stashes it away in cells to make a point when she has prisoners.

Darkwing Duck and Launchpad McQuack ignore several warnings from Neptunia to keep a distance, so she has Billy capture them and bring them to her base. She locks them up in one of the garbage cells, calling four electric eels to function as bars. After twice dumping junk on their heads, she gives her background story as to why she's been attacking St. Canard. Launchpad is moved, but Darkwing reacts with derision. Angered, Neptunia leaves to initiate her master plan to flood St. Canard. When she leaves, Darkwing uses a metal pipe among the debris to short-circut the eels and escape. Something Fishy

Retrieved from "https://darkwingduck.fandom.com/wiki/Neptunia%27s_base?oldid=24771"
Community content is available under CC-BY-SA unless otherwise noted.