The Negaverse is one of many mirror dimensions which exist parallel to one another. The Negaverse is defined by a destructive atmosphere that is almost impossible to counter, although even the Negaverse holds people who try. One of its significant inhabitants is Negaduck, who has mastered dimension travel and uses it to spread his brand of misery beyond the borders of the Negaverse. He has it in particular out for his mirror selves, Darkwing Duck most of all, because he can't stand not being unique and that most of them are do-gooders. 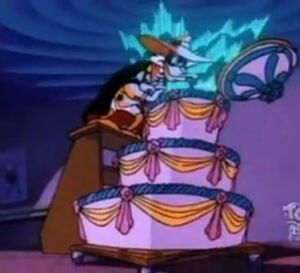 It is possible that the Negaverse is a counterpart of sorts to the Posiverse. Compared to the dimension of Darkwing Duck, the Negaverse comes close to being a moral mirror dimension. Counting Negaduck, 80% of the population encountered on his one trip there is a morally reversed version of the people he knows, but the remaining 20% is not. Nega-Gosalyn is a good person just like Gosalyn and while Tank isn't nice, he's not evil and thus has the same alignment as his Nega-self. In general, Negaverse people have about two to three core traits different between them and their Wing-counterparts. For instance, Nega-Gosalyn is obedient, while Wing-Gosalyn does whatever she wants. Nega-Tank is polite, helpful, and intellectual, which Wing-Tank is everything but.

Physical differences by birth are also possible between mirror versions, though only minor ones. For instance, Nega-Honker does not have a need for glasses, unlike his Wing-self, and the opposite is true for Tank.

The portal to the Negaverse is a cake and there is an oblivion place. Fortunately, it is sealed by the Universal Plug.