"Negaduck" is the thirteenth episode of Darkwing Duck, and the last episode to premiere as part of the show's "spring preview" on the Disney Channel. It was later the third episode to air on ABC.

Megavolt decides to rob a vault using his tronsplitter to sepereate the "positrons" (good trons) and "negatrons" (evil trons) but was disappointed because there were gray balls that were in the vault (as the balls were in bags). In one of the bags, Darkwing comes out in which he tries to stop Megavolt. Darkwing tries to stop Megavolt from escaping but during the process, the tronsplitter accidently zaps Darkwing as Megavolt would escape from there. From the zapping came Posiduck (the positron side of Darkwing) and Negaduck's (the negatron side of Darkwing) as both went back home.

At the home of Drake Mallard (Darkwing's secret identity) meanwhile, Launchpad and Gosalyn were playing baseball as Gosalyn Mallard accidentally broke a Darkwing statue with a bowling ball. Once they notice Darkwing come back home (which was Posiduck wearing Drake Mallard's clothing), Gosalyn and Launchpad try to glue the statue back together. Once Posiduck noticed the statue, he didn't scold Gosalyn but actually praised her and raised her allowance. Gosalyn however thought it was weird how Drake was acting and decided to give herself a punishment. Once Posiduck left the room, Negaduck came in with the clothing of Drake Mallard. Once Gosalyn and Launchpad noticed Negaduck (although they thought it was just normal Drake Mallard), they were surprised how he came back into the room without them noticing as he would scold Gosalyn for breaking the statue. During that time, Posiduck came into the room as Gosalyn and Launchpad were creeped out about how there were two Darkwings. While trying to figure it out, the Muddlefoots came over.

The good Darkwing meanwhile was trying to escape and led to the stick of dynamite that was lit to fall and would explode the safe that stopped Gosalyn and Launchpad from escaping. Then they would untie the good Darkwing as they would try to look for the bad Darkwing. Once they landed in a part of town, many citizens were looking for Darkwing. Both Darkwings were there as the bad one escaped leaving the good one to be beaten up by citizens. Both Darkwings would each go their sepearate ways to look for Megavolt. The bad Darkwing doesn't want to be paired with his good side leading to him wanting to destroy the tronsplitter while the good Darkwing wants to be with the bad Darkwing and use the tronsplitter to bring the two together into one.

"I am -mughn- the terror -ugh ugh- that flaps in the night! Ug-ughaa- I am the cat -pughugh- that somebody let out -pugh- of the bag! Ugh- I am -pughugh- Darkwing Duck!"
— Darkwing Duck is stuck in a dusty bag.

Posiduck: Virtue is its own reward! Negaduck: Oh, yeah? Well I say: "Don't get mad, get even!" Posiduck: There is no such thing as a bad boy! Negaduck: Nice guys finish last! Posiduck: Don't forget to floss! Negaduck: Never eat at a place called "Mom's"!

Posiduck: You demolished city hall. That wasn't very nice! Negaduck: Nor is this! (Blasts Posiduck)

Negaduck: (On the Ratcather)I'm goin' to town to do some crimes. Don't wait up for me!

Posiduck: Violence never solved anything! Negaduck: But it sure makes me feel good!

Negaduck: Well, if it ain't the Muddle-heads! Anyone ever tell you what a lousy dresser you are, Herb? Herb: I paid top penny for this shirt!

Darkwing: The show's over Megavolt, and the credits are all mine!

Negaduck: (To Posiduck)Give me back my face! You're getting it ugly!

Negaduck: I am the shopping cart that nicks your paint job!

Negaduck: I am the most fiendish terror that flaps in the darkest night! I am the skunk that pollutes your air! I am Negaduck!

Negaduck: Crimes? Who cares about crimes? I’m into wanton, mindless destruction! Just for the fun of it. 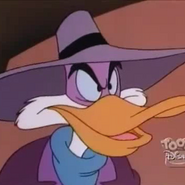 Negaduck fighting Posiduck, the galvanized positron half of Darkwing.
Community content is available under CC-BY-SA unless otherwise noted.
Advertisement