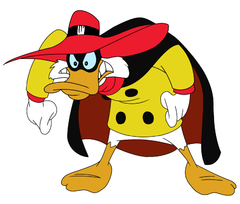 Negaduck is the "Darkwing" or Negative/opposite Darkwing Duck native to the Negaverse and the evil doppelganger of Darkwing Duck. He is known for using violent weapons and causing harm to anyone and anything he can.

He is voiced by Jim Cummings who was also the original actor for Darkwing Duck himself. He appears in the 2017 reboot, once again voiced by Jim.

Negaduck is the "Darkwing" of the Negaverse, where he rules St. Canard as Lord Negaduck and enjoys the loyalty of several of its most violent inhabitants, such as the Negaverse versions of Launchpad McQuack and the Muddlefoots. No facts of Negaduck's past are given, but as a parallel to Darkwing Duck with various equivalent relations, it can be assumed his life has seen similar key points. Life, the Negaverse and Everything One crucial difference between Negaduck and Darkwing is that Negaduck has fully embraced his villain identity and permanently parted with his civilian self. This is why it took him a long time before he pieced together that Darkwing Duck and Drake Mallard are the same person; he could not comprehend that Darkwing would want to have a "dull" life too. The Duck Knight Returns, Part 3 Years later, this difference became more pronounced when Darkwing changed his costume's turtleneck to a tie to bridge his two lives, while Negaduck keeps his turtleneck. The Definitively Dangerous Edition

Negaduck is the only "Darkwing" known to have understanding of dimensional travel. He has created his own transport systems, like the cake tunnel in the Sugar and Spice and Everything Nice Bakery Life, the Negaverse and Everything and the cross-dimensional transit system. Crisis on Infinite Darkwings, Part 1 Through this, he discovered the existence of other "Darkwings". Infuriated by knowing that not only he isn't unique but also that the majority of his transdimensional equals are heroes, he made it his mission to oppose them and Darkwing Duck in particular. Crisis on Infinite Darkwings, Part 4 Furthermore, Negaduck considers the Negaverse his own personal playground and has an interest in expanding his territory, which also serves as a motivation to cross dimensional barriers. Life, the Negaverse and Everything

Using anything from his trademark chainsaw to nuclear warheads to his well-trained dobermans, this villainous duck (Prison # 65439) seeks money, power, and the satisfaction of creating mindless, wanton destruction, and he'll do anything to get it. You name it, he's done it. He has an intense hatred for anything cute and cuddly, and will shoot the aforementioned on sight. These facts have created a fear of him in the populace of St. Canard, a fear shared even by the villains he leads in the Fearsome Five. A simple revving of his chainsaw, and they all cower at his feet. Despite his ruthlessness he always fails because of Darkwing Duck.

Negaduck's ego is comparable to Darkwing's. He once went on a major crime spree because Darkwing exposed the fact that Negaduck was Public Enemy #2 behind Dr. Slug. The Quiverwing Quack Unlike his double, it doesn't often get in the way of his work. Negaduck has taken advantage of this resemblance on more than one occasion, passing himself off as Darkwing to get into SHUSH Central Just Us Justice Ducks, Part 1 or commit crimes in Darkwing's name. Disguise the Limit Because the resemblance goes both ways, Darkwing has paid Negaduck back in kind. Just Us Justice Ducks, Part 1

Both Negaduck and Darkwing possess good intelligence and are highly trained in similar martial arts (although Negaduck is more focused on his goals than his image and doesn't constantly want to be in the media spotlight unlike Darkwing). Darkwing has done the same at times ("Just Us Justice Ducks").

Because Negaduck is one of the many clients of the villain costume designer who refuse to pay him properly for his work, he includes his outfit among his super-starch-powered costume army. Vogue's Gallery Double Scoop, Double Take Negaduck and Tuskerninni are playing Go Fish. They are not hiding that they are both cheating and after much frustration because the game does not progress at all, Negaduck remarks that at least one of them has to start playing fair. What Goes Around! Evil Eye-Yi-Yi! The Family Way

Negaduck the Pirate, his ancestor in Darkwing Doubloon.

Negaduck’s supposed parents in The Secret Origins of Darkwing Duck.

Add a photo to this gallery

Retrieved from "https://darkwingduck.fandom.com/wiki/Negaduck_(character)?oldid=26313"
Community content is available under CC-BY-SA unless otherwise noted.