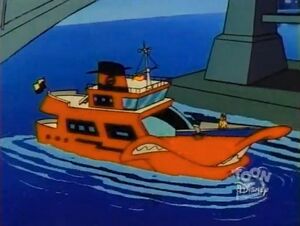 Negaduck's yacht is one of many, many vehicles Negaduck possesses and barely uses.

Like with all of Negaduck's color-coded toys, it's unknown whether he gets the yacht from the Negaverse or had it built within the dimension he uses it in.

Looking for something big to use the magic crystal amulet on, Negaduck gets on his yacht, sails up to Audubon Bay Bridge, and brings the bridge to life so St. Canard its iconic landmark will be its destruction. Darkwing Duck, Launchpad, and Gosalyn board the Thunderquack to go after him, but Negaduck uses the amulet to destroy the aircraft. Darkwing drops onto the yacht anyway and grabs the amulet, but slips and gets his leg caught in the anchor chain. Darkwing tries to drag Negaduck by his cape into the water with him, but the cape rips. However, Negaduck loses hold of his bazooka, which goes off and gets the ship blown up. Bad Luck Duck

Retrieved from "https://darkwingduck.fandom.com/wiki/Negaduck%27s_yacht?oldid=14150"
Community content is available under CC-BY-SA unless otherwise noted.