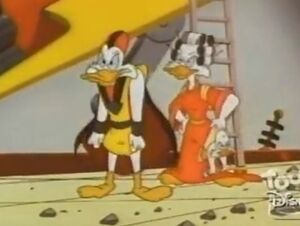 Negaduck's parents are the two terrible troublemakers that gave birth to Negaduck. They enjoy a dysfunctional marriage and could do with intervention from Child Protective Services.

The mother is voiced by Zelda Rubinstein and the father by Jim Cummings.

Negaduck's parents are inhabitants of Zipton, one of the many planets out there in the universe. Whether they ever liked each other or married for other reasons is unclear, but they certainly don't like each other by the time of their first child. They don't treat Negaduck well either, and even as a baby he takes after the worst aspects of them. This, in the end, is their undoing.

In a questionable retelling of the Darkwing Duck mythology, despite the woman's warnings that threatening the entire planet with a functional bomb is a ridiculous risk to take even if to become the planetary leader, her husband goes ahead and builds the bomb. He doesn't mean to actually blow everything up, but during a confrontation his brother accidentally sits on the detonator. The man quickly return home to finish work on a rocket to get off the planet, but there's only room for one passenger. The three family members fight for the spot, with Negaduck acquiring it. As their son escapes, the parents resign themselves to their fate, noting that dying isn't as bad as what Negaduck has in store for his new home. The Secret Origins of Darkwing Duck

Retrieved from "https://darkwingduck.fandom.com/wiki/Negaduck%27s_parents?oldid=24687"
Community content is available under CC-BY-SA unless otherwise noted.