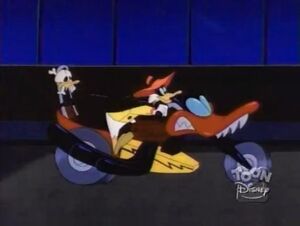 Negaduck's own motorcycle is one of many, many vehicles Negaduck possesses and barely uses.

Like with all of Negaduck's color-coded toys, it's unknown whether he gets the motorcycle from the Negaverse or had it built within the dimension he uses it in.

Negaduck is riding over Audubon Bay Bridge when, from atop the bridge's suspension cable, Quiverwing Quack pulls him off his motorcycle with her boomerang-with-rope arrow. In return, he pulls her off and over the edge to become shark food. Darkwing Duck saves her. Negaduck tries to flee, but Darkwing has decorated his motorcycle with a load of lit bombs. He and part of the motorcycle get launched far into the sky. The Quiverwing Quack Late at night at the Snuggly Wuggly Teddybear Company, Negaduck drives up with two vicious dogs in the motorcycle's storage compartment. He sics them on the toys while he enjoys the mindless destruction. Malice's Restaurant

Retrieved from "https://darkwingduck.fandom.com/wiki/Negaduck%27s_own_motorcycle?oldid=14157"
Community content is available under CC-BY-SA unless otherwise noted.