Nega-Megavolt is the good counterpart of Megavolt, living in the Negaverse. He's a rat. Just like his evil counterpart, he has superpowers and can thus control electricity as well. He is part of the Friendly Four and fights the forces of evil, especially Negaduck.

Once Negaduck is defeated, he becomes one of Nega-Gosalyn's guardians.

He was voiced by Dan Castellaneta. 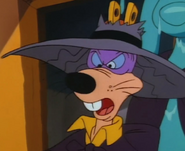