Nega-Honker is Honker Muddlefoot's evil counterpart. Even though he's just a little boy, he's already a tyrant. In the episode, Life, the Negaverse and Everything, it's his birthday and he can be seen sitting on a throne in his garden which is completely devastated and worthy of an apocalypse. He is completely mean and mischievous, like his parents. He doesn't seem to be Nega-Gosalyn's best friend, unlike his good counterpart.

He was voiced by Katie Leigh. 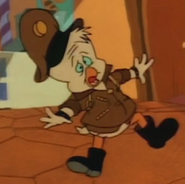