Nega-Gosalyn is the counterpart of Gosalyn Mallard, living in the Negaverse. Unlike Gosalyn, she wears a dress and appears to be very girly. She is innocent and does not seem to have the spirit to fight.

Her adoptive father is Negaduck but he doesn't seem to take care of her at all. Nega-Launchpad, however, gives her a lot of presents, which implies that Negaduck certainly orders him to do so and Nega-Gosalyn would then be a spoiled child, even if she doesn't act like one at all.

Later, when Negaduck is defeated, the Friendly Four take care of her and then become her guardians.

She was voiced by Christine Cavanaugh. 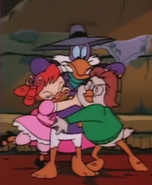 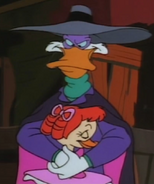