The mutant mushroom monsters are four monsters that together with Morgana Macawber run Macawber Mushrooms Unlimited. They are voracious omnivores and their eating behaviors include cannibalism. Basically, anyone going near them better has a good reason not to be eaten ready, because they are always ready to eat. As most monsters, they do have familiars that are safe from them, and as folks trying to run a business, they're also interested in not eating their entire customer base. Their relationship with Morgana is conditional; as long as she's with them, they accept her leadership, but the moment her loyalties seem to spread she too is at risk of becoming a hearty meal.

It is unknown who the voice actors for the female members are, but the two males ones are voiced by Frank Welker. 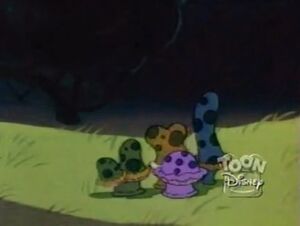 The origin of the mutant mushroom monsters is a tad unclear. When they turn into mushrooms in sunlight, Darkwing says "They were mushrooms?!" and Morgana replies "Another unfortunate side-effect.". Even knowing the other side-effect is the pizza mushrooms becoming carnivorous, the words are vague enough that the mutants could be monsters affected by exposure so that sunlight turns them into mushrooms or mushrooms that developed even further than the pizza versions and gained sapience and bipedal form. Morgana refers to the cavewoman as "Granny" and calls Nero "Uncle Nero", which points at the former interpretation, but they are never identified as Macawbers and Morgana takes their deaths lightly Fungus Amongus while being shown to care greatly about her confirmed family. Monsters R Us Because furthermore no confirmed Macawber asks about them or holds their deaths against Darkwing, the latter interpretation has more going for it in the end.

If they are mushrooms, they are the product of Morgana's experiments with fungi. They were created several years before she'd meet Darkwing and either set up Macawber Mushrooms Unlimited with her or joined her business. Housing, at least, will have been provided to them by Morgana. The tall man became a second-in-command to her and usually was the one to speak to her on behalf of the others. Their relation seems to have been good, even if Morgana had to keep them in check to prevent them from eating people, and the mutants acquired their own understanding of mushroom manipulation too. For all purposes, they were indistinguishable from regular monsters and even obtained familiars. The cavewoman got herself a huge snake with matching hairdo and Nero took a liking to spiders, some of which came to reside on his head. The tall man may have been particular to ghost hounds.

Seeking to create a breed of mushrooms that taste like pizza so that they can save money and time compared to the rest of the market, they arranged for thefts of large supplies of topping ingredients to fuse with the mushrooms to work towards their first perfect crop. This is how Darkwing came on their path. Morgana betrayed them in the crimefighter's favor, and their attempt to attack both resulted in the destruction of their entire work and their return to mushroom bodies, which was a process they did not like. Whether it actually killed them as persons is an assumption, but it did not look good for them. Fungus Amongus

Of the group, Nero is the most voracious, followed by the cavewoman and Janice's pig side, while the tall man and Janice's dog side have the most self-control when it comes to food. The tall man also is the leader and spokesperson, while Janice has the competence to come up with suggestions of her own. The cavewoman, who communicates with action rather than words, aside from her cackle, has the role of strong one of the group and the tall man appears to like her best, although he gave an aside glance when she repeatedly hit the ground with her club. Nero is a bit of a wildcard due to his appetite; he's prone to drop or neglect original goals if he finds food or better food on his path and it's up to the others to keep him in line. That's not to say any of them is not a voracious monstrosity ready to take a bite out of everyone in sight, but there is some self-control for practical reasons, like running their business without drawing unwanted attention. They only have true loyalty towards each other and their relation with Morgana Macawber is a fragile one.

The mutant mushroom monsters are having a board meeting because of Darkwing Duck ruining the thefts for topping ingredients they need for their mushroom farm when the crimefighter just so happens to break into Macawber Mushrooms Unlimited to investigate. They move in to eat him, but Morgana saves him and gives him a tour around the place. The mutants see she's attracted to him, but that he's even more sensitive to her charm so they don't object to this tactic. They intervene when Morgana considers allowing Darkwing to stay and tell her to kill him next time. Morgana counters she has him wrapped around her finger and that murder will only be Plan B. During the tour, Nero has left with his spider army to fetch green peppers. They encounter Launchpad at the warehouse, bind him, and prepare to eat him. Darkwing arrives in time to save him, but he too is caught to be a midnight snack. Fortunately for the both of them, Morgana had a suspision of what was going on when Launchpad radioed for help and came to check on Nero. She orders him out, angering him, but he obeys. Due to Morgana's orders, Darkwing and Launchpad are soon up and running again and find a milk truck squeezed out and deserted in the middle of the road. As Darkwing deduces that the milk will have been stolen to turn into cheese, the cavewoman and her pet cavesnake crawl out of a manhole to attack the heroes. Quick thinking saves them and the two villains retreat. Darkwing recognizes the cavewoman as Morgana's associate and so they follow down into the sewers, where they find a bustling mushroom farm and all of the stolen topping ingredients. The mutants are there too and Darkwing is convinced they've secretly built competition for Macawber Mushrooms Unlimited. He drops his "I am the terror"-line, but the mutants are merely happy dinner has arrived. Morgana joins her associates to capture the heroes and tries to get a bound Darkwing to join her side. He refuses and the mutants make clear to Morgana that they doubt she's still fit to be president of Macawber Mushrooms Unlimited. Morgana argues that her interests coincide with the company's and puts on lipstick that will put the crimefighter into a zombie-like state for her to command. Her first order after kissing and freeing him is to throw Launchpad into the pizza mushroom cage, which Launchpad is fine with until those turn out to be carniverous. Just as Darkwing is about to throw him in, he turns around and uses Launchpad's body to knock over the mutants. Morgana consciously put on harmless lipstick to give the three of them a chance to escape. As they run, the mutants get up, agree to remove Morgana from her leadership role, sic their pizza mushrooms after the escapees, and follow for leftovers. Darkwing ensures the destruction of the pizza mushrooms, which angers the mutants because it was their entire crop and worth years of research. They prepare to attack, but as they are outside, they are exposed to sunlight when the storm clears. They de-mutate back into mushrooms, finally clueing the crimefighters' in to their enemies' true identity. Fungus Amongus

Retrieved from "https://darkwingduck.fandom.com/wiki/Mutant_mushroom_monsters?oldid=24981"
Community content is available under CC-BY-SA unless otherwise noted.