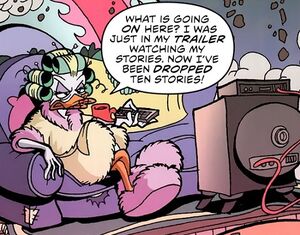 Mrs. Crackshell is the mother of Fenton Crackshell, the civilian identity of the superhero Gizmoduck. She is one of only two people who know of this and even serves as a backup user for the Gizmosuit, calling herself Gizmomama in this situation. Mrs. Crackshell spends her days lounging in front of the television and tries to keep household chores to a minimum. Microwave meals are the main food consumed in the Crackshell household, but considering Fenton is allergic to his mother's cooking, this is for the best. Her laziness notwithstanding, Mrs. Crackshell is a mechanic who may be unrefined in her methods but does get things to work.

The details of Mrs. Crackshell's past before her days living with only her adult son, Fenton, are covered by a single mention of Mr. Crackshell. Mrs. Crackshell, amused, recalls how he called her worthless before looking away sadly. The reaction could be either in response to hurt over his behavior or an indication that she misses him. The fact she still goes by "Mrs. Crackshell", even introducing herself to a prospective new life partner like that, supports the latter scenario over the former. Fenton never acknowledges his father, suggesting he disappeared from the family when Fenton was still young.

Mrs. Crackshell is someone who has an energy-efficient way of going about things and as a result makes a slovenly and aloof first impression. Rather than cleaning the floor of her trailer every once in a while, she does it once in a year. The same goes for doing the laundry. In fact, the only activities she gets off from the couch for are ones of immediate self-care, like eating, bathing, and fixing the TV when it acts up. She is satisfied this way and even when her son made a small fortune all they got themselves were a bigger trailer and better versions of stuff they already had. Her social needs are largely met through her television addiction. There is not a show that isn't her favorite and she is up to date on the developments of all of them.

That said, at the core of her emotional awareness is the love she holds for her son. It's not something she always shows, shows timely, or shows well, but the thought of possibly losing Fenton is guaranteed to be a wakeup call. Because it takes these extremes for her to grab onto her priorities, the two have a difficult relation. Mrs. Crackshell holds authority over her son because he wishes for them to be on good terms, but if he stands up to her, a reversal of power happens without resistance.

Mrs. Crackshell is lazy and cranky, but she loves her son, no matter what.

Mrs. Crackshell is usually seen in a robe and slippers, and wears curlers in her hair.

Crackshell is having an average day of watching television when Fenton brings her news he has quit his job as bean counter and is now an accountant for Scrooge McDuck. He wants to celebrate with her, but she wants to watch her shows and refuses. Some days later, Fenton returns with another announcement. He now has a superhero alterego known as Gizmoduck, who also works for Scrooge. DuckTales

Agent 44 receives the order from Scrooge McDuck to bring in Mrs. Crackshell to talk with her son, who had fallen under the control of the ink. Scrooge reveals to her that her son is the one inside the Gizmosuit and, as he is rampaging, she starts yelling at him to behave. Her aggression undoes the effect of the ink and Fenton returns to his normal state of being. The Beagle Boys and the Fearsome Four attack in response to their test subject being rendered harmless, so Gizmoduck picks up his mother and other allies present and escapes through the window. The group lands shaken but safe on the street below, just in time to meet up with Launchpad and hear of the fate of the children. Dangerous Currency, Part 2 Webby Vanderquack and Gosalyn Mallard are saved from the boys, who due to the ink have been mutated into violent monstrosities. Needing a cure first, the group takes the Thunderquack to Gyro Gearloose's laboratory in Duckburg. There, they replicate the situation that freed Gizmoduck earlier by having Mrs. Crackshell yell at him. They record her sound. Dangerous Currency, Part 3 Dangerous Currency, Part 4

Mrs. Crackshell in the series.

A cleaned-up Mrs. Crackshell with her son and Gandra Dee on a date at a drive-in movie.

Officer Crackshell-Cabrera in the reboot.
Add a photo to this gallery

Retrieved from "https://darkwingduck.fandom.com/wiki/Mrs._Crackshell?oldid=25515"
Community content is available under CC-BY-SA unless otherwise noted.