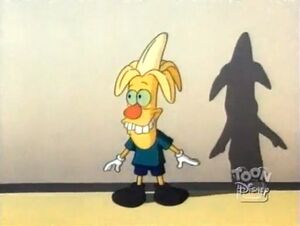 Quackerjack leaves a clockwork Mr. Banana Brain at the Whiffle Boy warehouse to blow up all the merchandise. When stuck in the videogame itself, he also uses one to destroy Whiffle Boy. "Whiffle While You Work" The plush version of Mr. Banana Brain hangs with Quackerjack in his toy kingdom to discuss the matter of no one buying the latter's toys. Quackerjack believes it's the parents' fault and concludes he should get a bunch of children to his kingdom to sell his creations to. Mr. Banana Brain wants to know where he plans to get the children from, which agitates Quackerjack until a flyer announcing a school play falls down from the surface. Of course, this plan sets Darkwing Duck on the toymaker's trail. Their battle turns the toy kingdom to toy ruins and Gosalyn finds Mr. Banana Brain among the wreckage while looking for her father. A distraught Quackerjack tries to blow up the whole place, so Gosalyn pulls the pin from Mr. Banana Brain and throws the doll at him. The small explosion is effective, but Quackerjack still igites the large one. "Toys Czar Us" When Quackerjack becomes a member of the Fearsome Five, he brings Mr. Banana Brain along for the ride. "Just Us Justice Ducks, Part 2" After the group is told by Negaduck that they can't come to his secret hideout, Mr. Banana Brain suggests they'll just follow him, which is unanimously agreed to. "Life, the Negaverse and Everything" Back on a solo mission, Darkwing thwarts Quackerjack's plan to blow up a yoyo factory and plants a tracking device on Mr. Banana Brain. When later Darkwing reveals he found the duo thanks to Mr. Banana Brain, Quackerjack angrily throws away the traitorous doll. "Quack of Ages" He and Mr. Banana Brain have made up by the time they and Megavolt upgrade the time top to travel to the future to utilize its advanced technology. They accidentally bring Gosalyn to the future too and her disappearance has severe consequences to Darkwing's views on protecting St. Canard. They are arrested for parking in a no parking-zone. Mr. Banana Brain's attempt to blame it on the other two crooks goes ignored by Darkwarrior's robots. Fortunately, Gosalyn doesn't like this future either and teams up with the villains as well as the future-civilians who are done with Darkwarrior's reign to get the time travellers home. "Time and Punishment" Back in their present, Quackerjack and Mr. Banana Brain rob a toy museum. Among the loot is a haunted jack-in-the-box, which inhabitant, Paddywhack, possesses Mr. Banana Brain. Quackerjack likes his friend's new voice and flight ability, but not nearly as much as his ideas to cause chaos. They bring about a revenge-driven food fight at a local pizzeria, but Darkwing stops it before Paddywhack can feed on the misery proper. Paddywhack is furious and orders Quackerjack to kill Darkwing. The jester doesn't take well to Mr. Banana Brain's change in attitude and tired of the charade, Paddywhack reveals himself. Finding Quackerjack useless as minion, he sucks him and Mr. Banana Brain into his box to feed on his misery for good. To this end, the two are forced to wear business suits. An opportunity to escape arises when Darkwing becomes trapped too. They team up to make Paddywhack the one who's miserable. Mr. Banana Brain suggests some mercy, but it's withheld until Paddywhack lets them all go. "The Haunting of Mr. Banana Brain"

Quackerjack escapes from jail on his own and puts together a New New Mr. Banana Brain, whom he takes along to Aloysius J. Mandelbaum to steal his molecular digitizer. After being tricked into making some adjustments to the device himself, the inventor is the first Quackerjack turns into a toy, meaning to make the entire userbase of World of Whifflecraft his next victim. He and New New Mr. Banana Brain infiltrate the Whiffle Boy Entertainment offices and take the personnel hostage to get access to the servers. Just before Quackerjack can hook the molecular digitizer up, Darkwing drops in and has Mr. Banana Brain do the talking. Quackerjack is happy to see that his old friend recovered, but is unable to take him back now that he has New New Mr. Banana Brain. He has Darkwing restraint and activates the molecular digitizer, but the dolls, which have fallen to the ground, are in contact with its wires. The device has the opposite effect on them as on people: they became huge and alive. They both want Quackerjack as their playmate and start a tug of war with his arms. Darkwing undoes the change, but too late for Quackerjack to come out mentally well. He leaves the dolls behind as he runs off. "Toy with Me" Mr. Banana Brain and Quackerjack are both acquired by the League of Eve-il, who have them brought to their base of operation. With the ink, Quackerjack is cured and upgraded into a living toy. Mr. Banana Brain becomes a part of his new form, which suits him just fine. In their new form and with the rest of the Fearsome Four, they attack Darkwing, Scrooge McDuck, Gyro Gearloose, Little Helper, Gizmoduck, and Mrs. Crackshell when they infiltrate the base. The heroes escape to Duckburg, "Dangerous Currency, Part 2" so the villains go after them. The Fearsome Four are ordered to patrol the streets, which they do until Darkwing zaps them with ink-antidote. "Dangerous Currency, Part 3"

A mobile Mr. Banana Brain tries to keep Quackerjack out of Darkwing's clutches by throwing banana peels at the hero from high up at the construction site, but ultimately Darkwing defeats the duo. "Darkwing Duck"/"Darkwing Duck"

Retrieved from "https://darkwingduck.fandom.com/wiki/Mr._Banana_Brain?oldid=21851"
Community content is available under CC-BY-SA unless otherwise noted.