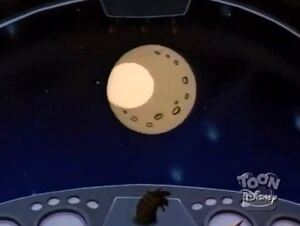 The moon is the only natural satellite the Earth has.

Wolfduck awaits Darkwing Duck on the roof of a skyscraper after the latter has made his way though the F.O.W.L. forces active in the city. With the full moon out, Wolfduck has access to his stronger form and jumps after or throws boxes at his opponent. The one flaw in his plan is that it's a cloudy night and every time the moonlight is blocked, he reverts to his regular form. Darkwing makes use of these moments to take him down. "Darkwing Duck"/"Darkwing Duck"