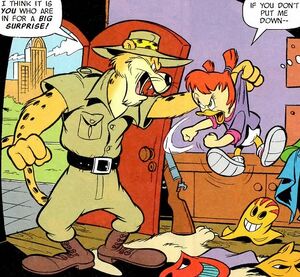 Mondo is a big game hunter with an unconventional choice of target. He hunts superheroes with the goal of stealing their masks and exposing their identities to the world, thereby shaming them into retirement. For his actions, he is known as the Mad Mask Misappropriator and feared by many a superhero. At the height of his career, he owned 982 superhero masks, Darkwing Duck's included. While he does not possess any super powers, he is smart, knows how to set traps, is an expert climber, and uses the element of surprise, while his own escape is covered by boots with extendable springs.

Mondo presumably was a regular hunter prior to taking aim at superheroes as his final prey, perhaps because they are already hunters in their own right — of supervillains, that is — making him a hunter of hunters. His modus operandi is to lead his target into a trap in a public space, steal their mask or whichever headwear stands in for it as trophy, hold up their bare face to the crowd that has inevitably gathered by then as a form of humiliation, and then return to his trophy van to add the mask to his collection and be at a television set in time to watch the news report to establish his victory. The only hiccup in this ritual he tolerates is missing out on showing off his unmasked prey; the trophy and the news report or other form of public confirmation are a must for him to consider a hunt done.

The trophy van is Mondo's home on wheels. It is a campervan he stores all he owns in to travel well-equipped from prey to prey. This mobile hideout is one of Mondo's main assets on the hunt, the other being his special boots. There are springs hidden in the soles of the boots he can activate to extend at will. They are strong enough to catch his fall from a two-story building and possibly even higher. With them, Mondo can move easily through city terrain, which he makes use of whenever he has to escape.

In a word, Mondo is conceited. He's an excellent hunter who works with inventive but still simple equipment and who has gotten it in his head that the best way to prove his mastery is to go after superheroes. He doesn't have anything against them personally or has any criminal investments; they're simply who he has chosen to go after. He takes great pride in his collection of masks and treats it as his gift to the world he has to finish before he can retire. Because arrogance is the fuel behind his actions, it is his main weakness because it makes him predictable. If either trophy or public acknowledgement lacks, it is the perfect bait to manipulate his actions.

Presumably, Mondo is a cheetah. He is a tall man with subtle muscle mass and orange pupils. He dresses in a stereotypical safari outfit with matching fedora. His boots may seem ordinary, but they are his greatest gadget: inside the soles are springs that he can extend as he chooses. These allow him to jump from tall places safely and travel at high speed, which makes him rely on them whenever he's out of his league and needs to get away fast.

At 981 masks, Mondo realizes that he has forgotten about Darkwing Duck due to his file having gone missing by accident. He resolves to fix the matter immediately, looking forward to retiring with a full collection of superhero masks in his possession. He sets a trap at the St. Canard Opera House, presenting himself as a robber so Darkwing will come. One net and a fake paw on a stick are all Mondo needs to unmask the hero, but he fails to show his bare visage to the world because Gosalyn throws a pie in her father's face, obscuring it. Mondo hadn't counted on backup and uses his spring boots to hop to safety, satisfied with just the mask. He returns to his trophy van and, after admiring his completed collection, turns on the television to end his superhero hunting days with the news report on Darkwing's defeat. Much to his shock, Darkwing himself is on TV, wearing another mask. Darkwing mockingly states that Mondo only has his auxiliary mask and that he'll never have the real one. Furious, Mondo makes his way to City Hall where the report is being made to get the other mask, oblivious to the fact it's a trap. He gets Darkwing's other mask, but Darkwing has a third underneath as well as backup from Launchpad McQuack. As the planned-for fight ensues, Gosalyn sneaks away to Mondo's van to steal all 982 masks to return to their rightful owners. However, the trophy van has an alarm installed which sends a signal to Mondo's watch. Mondo cuts the fight short to protect his property and catches Gosalyn before she can make off with the masks. Darkwing, who followed the crook, tackles him. Gosalyn quickly leaves with the masks as Mondo sets his attention on Darkwing and unmasking him for good. It takes a while, but eventually he gets to unmask him. Right about then, the superheroes who received their masks back come to Darkwing's aid. Knowing he can't defeat all of them at once, Mondo means to hop away, but Darkwing attaches a chain between a fire hydrant and his boot springs. He falls back down to earth, right in the waiting fists of all superheroes he unmasked during his career. After all that, he tries to keep some pride from the fact he still unmasked all of them, but Darkwing reveals he'd been wearing two more masks all this time: one head-encasing mask looking like his face and the regular purple mask underneath. Mondo angrily grumbles he'll collect stamps from now on. "Mondo: The Mad Mask Misappropriator"