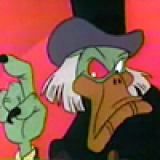 He is voiced by Jack Angel.

Moloculo is Morgana's father and the Patriarch of the family. Moloculo is prejudiced against Normals and Darkwing in particular. He is an alumni of Eldritch Academy of Enchantment and, much like Morgana, tends to make a lot of mistakes with his spells (for example, attempting to summon demons only to get demon umbrellas).

Although Moloculo is a rather serious and ancient-looking monster, he can be immature and petty when it comes to the welfare of his daughter, and he does not approve of her choice in a boyfriend. He constantly picks on Darkwing and zaps him when Morgana isn't looking. He wishes Morgana would settle down with a "ghoulish" boy and raise a family of little monsters. He can be controlling at times but only wants what's best for his daughter.

He has one red eye on the right, green skin, black fingernails, white hair, and wears black clothes.

Moloculo supports Morgana while she is doing a thesis presentation at Eldritch Academy."Hot Spells"

Retrieved from "https://darkwingduck.fandom.com/wiki/Moloculo_Macawber?oldid=28491"
Community content is available under CC-BY-SA unless otherwise noted.