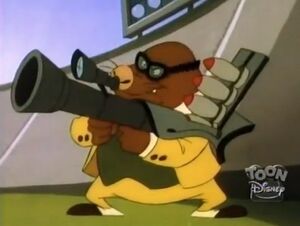 Moliarty's bazooka is a weapon owned by Moliarty, which he uses if his troops fail him and he has to personally deal with an annoyance.

Moliarty is a technical genius, so he may have made the bazooka himself, but just as well he may have stolen it from the surface.

With his troops fleeing upon the return of the sun, Moliarty refuses to go down without a fight. Facing the heroes alone in the stadium-turned-kinetobeam, he gets his bazooka and starts firing. The heroes try to fight back, but accidentally hit him with laughing gas, which only makes the barrage on them worse. Trying a more subtle tactic, the heroes start a baseball game, confusing Moliarty enough that he temporarily doesn't fire. Honker hits the ball against the bazooka, making Moliarty drop it. That Sinking Feeling

When Darkwing enters the caverns in search of Moliarty and clues, the latter occasionally assists his troops by popping from the ground with his bazooka and taking a shot at the hero. It doesn't stop Darkwing from reaching his lair and while Moliarty is invulnerable underground, he has to come up in order to deal bazooka damage to the infiltrator. Darkwing defeats him by avoiding the ammo and utilizing the openings. Darkwing Duck

Retrieved from "https://darkwingduck.fandom.com/wiki/Moliarty%27s_bazooka?oldid=15781"
Community content is available under CC-BY-SA unless otherwise noted.