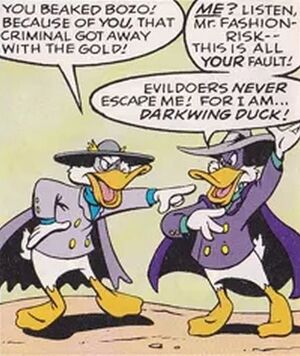 Miztec Mallard is a crimefighter active in Mexico. He and Darkwing Duck of St. Canard are eerily similar, from the catchprase to the costume down to the ego. Naturally, they can't stand each other. Like his counterpart, Miztec Mallard is good at nabbing crooks and appreciated by the local police force for it.

Named in reference to the Mixtec peoples, Miztec Mallard is native to Mexico, presumably the coastal area in or near Oaxaca. His civilian name, much like anything about his civilian life, provided he has one, is not given. As the owner of a gas gun and having the same sense of theatrics as Darkwing Duck, it can be assumed Miztec Mallard is a skilled martial artist too and has ties to an organization that provides him with gadgets.

Miztec is a well-respected hero whom the population knows they can turn to in times of trouble. He is also arrogant to a fault and lives for the excitement and glory of being a mysterious defender of justice. Enjoying his self-appointed task as he does, Miztec has workaholic tendencies. He furthermore hates sharing the spotlight, but thinks little of taking it from another.

Miztec Mallard is a white-feathered duck of small and lean stature. His hero costume has the same basic outfit as Darkwing Duck wears: a shirt with turtleneck, a suit jacket over it, a cape, a mask above the beak, and wide-brimmed headwear. The difference between them is in the details. Miztec wears lighter shades of purple than his counterpart and mixes it up with blue instead of aquamarine. The lower edge of his cape is jagged whereas Darkwing's is straight and while Darkwing wears a felt hat, Miztec has a helmet with small wings on the brim.

It would be another day of catching low level crooks for Miztec Mallard were it not for Darkwing Duck picking his city to spend a vacation. Miztec goes in to stop a robbery at a hotel, but he collides with the other vigilante who is also coming after the robber. The criminal gets away with the loot and a good laugh, prompting Miztec to admonish Darkwing to mind who the hero around there is. A policeman runs up to them, begging Miztec to stop the criminal who's working through a streak. Miztec leaves with the officer to track down the robber, but every time he tries to apprehend him, Darkwing is also at the crime scene trying to arrest him himself. Every single time, they unintentionally ruin each other's attempt. Miztec eventually gets the police involved to force Darkwing on a plane homewards, but Darkwing's struggling against their grasp knocks out the robber who is coincidentally passing by. Darkwing gets to be the day's hero, but Miztec's revenge is served cold when later he visits St. Canard for a vacation. Busman's Holiday

Retrieved from "https://darkwingduck.fandom.com/wiki/Miztec_Mallard?oldid=21785"
Community content is available under CC-BY-SA unless otherwise noted.