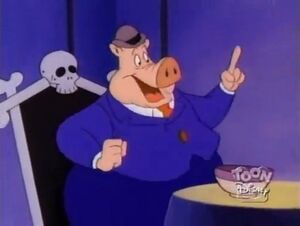 Mr. Mikey is a food critic known for his impeccable standards. He is not easy to please, but when he is, he is not stingy on the compliments. He thinks highly of commitment to a chosen image and judges restaurants as much on that as on their food.

He is voiced by Charlie Adler.

Mr. Mikey is a food critic active in St. Canard. He's been to plenty of restaurants during his career and tasted many dishes, including ones that contain tarantula, which he doesn't eat anymore because it gives him heartburn. He has an exaggerated reputation of not liking anything, but he's simply mindful of a lot of factors that make or break an eating experience.

While intimidating due to his critical eye and taste buds, Mikey is as generous and sincere a critic as one can find. He cannot be bribed and takes it as a personal insult when people think he can. Unconventional food doesn't worry him as he goes into an eating experience with trust towards the cook. One thing he can't stand is when restaurant owners don't trust themselves and try to enhance their offering with elements that don't fit the established atmosphere but are popular.

Mikey is a corpulent, bald pig on the tall side of medium height. He dresses in suits and wears a bowler hat.

Mikey is one of the guests at the opening night of The Shadow Chateau. It's raining, so Eek and Squeak bring him an umbrella to reach the front door dry. Mikey is pleased with the service and also finds the decor charming and unique. After considering the menu, he takes the cream-of-grub soup and the ghoul-ghoulash. Eek and Squeak are only just gone to report on his order when Darkwing joins his table and offers a bribe of 50 dollars if he gives The Shadow Chateau a good review. Mikey is insulted, so Darkwing ups the offer to a 100 dollars, upon which the food critic leaves angrily. Morgana intercepts him to ask what's wrong and Mikey reveals Darkwing's scheme. Morgana plays it as if Darkwing is simply joking and offers a free meal to the food critic if he stays. This he accepts, and he doesn't regret it. The food and the ambiance are superb and he promises Morgana a favorable review. That is, until the Cute Little Lost Bunnies, whom Darkwing invited and forgot to cancel, come in. Accusing Morgana of insincerity to her chosen style and aiming for cheap points, he tears up the review and leaves. Malice's Restaurant

Retrieved from "https://darkwingduck.fandom.com/wiki/Mikey?oldid=20816"
Community content is available under CC-BY-SA unless otherwise noted.