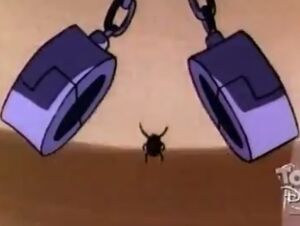 Merriweather the Cockroach Mime is a world-renowned artist and the unintentional inspiration to the Bugmaster's genesis.

Despite being a cockroach and barely visible on stage, Merriweather somehow made it big as a mime and is nowadays hailed as a representative of culture. A point of note in his career is his abduction by the Bugmaster to be an unwilling part of a scheme against Darkwing Duck. He nearly died, but came out unscathed thanks to the hero.

Even though Merriweather is a star with worldwide fame, he remains down-to-earth. He's sensitive and considerate.

Other than being a dark brown and small cockroach, Merriweather is as nondescript as they come.

Merriweather the Cockroach Mime is performing at the St. Canard Center for the Arts and is therefore a topic of note in the city, especially since there's no crime occuring because all the villains are off to a convention in Florida. This situation is a problem to the anchorwoman Bianca Beakley, who has nothing to report on. She reasons that if St. Canard wants bugs and crime, she can arrange that by becoming a bug-themed villain herself: the Bugmaster. Her first crime is the abduction of Merriweather from the stage, at which time she also issues a challenge to Darkwing Duck to stop her. Merriweather is kept on the Bugmaster to serve as a hostage when Darkwing gets the drop on her at the St. Canard Museum and is thereafter used as a distraction in the abandoned wax factory where the Bugmaster plans to kill the crimefighter. Merriweather tries to warn Darkwing and Launchpad, but Darkwing dismisses him on account of being a cockroach. After predictably being captured, all three are strung up above a vat of liquid wax to be boiled alive. Darkwing frees himself and turns the handle just before Launchpad and Merriweather hit the wax. In the ensuing battle, the two are repeatedly endangered to the point of nausea but survive the ordeal. "Fraudcast News"