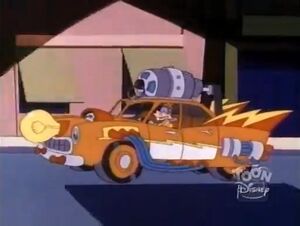 Megavolt's car is one of Megavolt's vehicles and the one he uses most often. It's an orange car tuned up with a generator on the roof and a huge lightbulb on the front that can't make finding a parking spot any easier.

Possibly inspired by the electric car he once knew, Duck Blind Megavolt built himself his own ride. He mainly uses it when he's teaming up with someone or planning to team up with someone.

Megavolt takes the car to get himself and his recently brought-to-life refrigerator and TV set to an appliance store to add another to their gang. Darkwing Duck drops by to stop him and the appliances tell Megavolt to get back to the car and return to his hideout while they deal with the crimefighter and his sidekick. A Revolution in Home Appliances While teaming up with Quackerjack, the duo make use of Megavolt's car to get from crime scene to crime scene. They leave the car unsupervised when they set the city on fire and, learning that to be a bad idea, start running for their lives. Stressed to Kill Megavolt chases after the frequency fiends in his car in hopes of convincing them to be his new partners in crime, but they just insult him before flying off. Distracted by the disappointing result, Megavolt fails to notice the broken-open road and warning signs up ahead in time. He comes to a screeching halt before the car can be damaged, but because he's not wearing his seatbelt, he crashes through the windshield. The Frequency Fiends

Retrieved from "https://darkwingduck.fandom.com/wiki/Megavolt%27s_car?oldid=14888"
Community content is available under CC-BY-SA unless otherwise noted.