Megavolt, civilian name Elmo Sputterspark, is an anthropomorphic rat who possesses the power of electrokinesis.

He was voiced by Dan Castellaneta. His voice also resembles that of one of Castellaneta's Simpsons characters, Krusty the Clown. In the DuckTales reboot, he is voiced by Keith Ferguson.

When bully Ham String and Preena Lott sabotaged his science fair project on static electricity, young Elmo Sputterspark gained the ability to absorb and project electrical currents, and to grant nearby electrically powered objects a form of sentience. He wanted to call himself "Megawatt", but the band playing at the dance had already adopted that name. "Clash Reunion" Sputterspark's transformation gave him virtually unlimited power. However, it also fried several portions of his brain, leaving Megavolt a peculiar sort; he believes that light bulbs, toasters and anything else powered by electricity have been "enslaved" by Mankind and need rescuing, which explains why he is usually seen leaving the crime scene with bags full of flashlights, toasters, and ovens instead of money."Inside Binkie's Brain" He's also become romantically interested in electrical devices, having declared his love to a lightbulb "Comic Book Capers", gone on date with a billboard (with a picture of a woman on it), "Inversionary Tactics" made heart-eyes at the empty Gizmosuit, "Dangerous Currency, Part 1" and was too preoccupied with a centerfold of the hadron collider to bother to escape. "A Midsummer Gnat's Spree" As a villain, Megavolt has procured himself two hideouts, one an apartment in the bad part of town, the other the Lighthouse at Beaker's Point.

Megavolt was a member of the Fearsome Five "Just Us Justice Ducks, Part 1" and occasionally teamed up with Quackerjack as a duo. "Stressed to Kill" He twice partnered up with Darkwing Duck on a case out of self-interest. "Negaduck" "The Frequency Fiends" In "Life, the Negaverse and Everything", his Negaverse counterpart appears to be the leader of the Friendly Four. In one episode "Up, Up and Awry", Darkwing Duck defeats Megavolt by turning his own powers against him - he literally charges and changes Megavolt into a super magnet. This is a recurring problem to Megavolt; he may be one of the strongest mutants in St. Canard, he also is subject to his own powers. It's happened several times that others have used his powers without his consent, often hurting him in the process. "A Revolution in Home Appliances" "Watts the Problem!" "The Duck Knight Returns, Part 3" Despite being rather dimwitted and absentminded at times, Megavolt is one of Darkwing Duck's more dangerous adversaries in terms of the sheer amount of power he possesses - Darkwing himself uses Megavolt as an example of what a supervillain is. "Planet of the Capes" Darkwing himself even considered him his arch-enemy, "The Frequency Fiends" although he has also referred to Quackerjack and Ammonia Pine as his nemeses. Darkwing also mentions having sent him to the electric chair twice, "Duck Blind" implying both that Megavolt has previously committed at least two murders, and was electrocuted but survived due to the nature of his powers.

Megavolt can best be described as eccentric. He's loud, forgetful, clumsy, absent-minded at times, and isn't too shy about his insanity. He spends most of his time pursuing his goal of freeing all "enslaved" light bulbs, though he is often foiled in his attempts. As a result of a previous accident, Megavolt was granted superhuman electrical powers at the cost of his sanity. Every one of his brain cells was supercharged, but his short-term memory was lost in the process. After discovering who Darkwing is, he quickly forgets the same episode and loses knowledge of his own identity as well. The incident also seems to have convinced him of the sentience of inanimate objects, thinking them to be living creatures.

Megavolt is also a skilled inventor, creating weapons such as The Electro Gun, The Electrolizer, A machine that granted him the ability to give inanimate objects life, and the Tronsplitter. Despite his mechanical prowess, he tends to rely on his powers to win a fight. When his powers become unavailable, (via short-circuiting, being out of 'juice', or getting his powers stolen by Negaduck) he usually retreats. Such a situation can be found in the episode Jail Bird when he panics and runs to Darkwing for help after finding out Negaduck has stolen his powers. Despite being Darkwing's Arch Enemy he seems to hold a level of respect for him, even being willing to help Darkwing if the situation calls for it.

"Duck Blind" "Negaduck" "Comic Book Capers" Upon spotting from afar the flashy show Darkwing is giving for his fanclub, Ammonia Pine notes that it looks like Megavolt's holding a block party. "Cleanliness Is Next to Badliness" Megavolt is among the villains Darkwing dreams up during a period of low crime. In the dream, he is defeated by a giant Morgana Macawber. "Ghoul of My Dreams" "Up, Up and Awry" "Adopt-a-Con" "Just Us Justice Ducks, Part 1" "Just Us Justice Ducks, Part 2" "Life, the Negaverse and Everything" "A Revolution in Home Appliances" "Darkwing Doubloon" "Dead Duck" While trying to teach Comet Guy to be a villain, Darkwing brings up Megavolt as a prime example of what he should strive to be like. "Planet of the Capes" "Twitching Channels" "Stressed to Kill" "Time and Punishment" "Inside Binkie's Brain" "Whirled History" While Negaduck and Dr. Slug have a rivalry over who's Public Enemy Number One, Megavolt steadily holds a spot at Number Three. "The Quiverwing Quack" "Jail Bird" "Inherit the Wimp" "The Frequency Fiends" "Clash Reunion"

Megavolt puts money together with Moliarty, Tuskerninni, Steelbeak, Liquidator, Quackerjack, and Bushroot to watch the Miss Corn Fritters Pageant on pay-per-view. Their session is temporarily disrupted by Darkwing Duck, who suspects that they are involved in the abduction of Fluffy. However, Darkwing also meant to watch the pageant and readily agrees to pay ten bucks to get to watch along. Some hours later, the pageant finishes and everyone gets back to business, which for the villains means attacking Darkwing Duck. Megavolt tries to zap Darkwing but misses. After his colleagues fail to take down Launchpad, he goes after him. Before he can fry him, though, a sponge holding Liquidator lands in his neck and causes him to short-circuit. Darkwing calls the cops on them and they are all hauled off to jail, even though they had nothing to do with Fluffy's disappearance. "The Kitty Kat Kaper" In order to break the influence of the gambleholic toxin on Darkwing, Launchpad tries various lies in the hopes one of the scenarios will restore the crimefighter's focus. "Megavolt just escaped and he's flying over the city in a giant toaster oven!" is one of the lies that don't work. "Feeling Flushed" "Watts the Problem!" Because Megavolt is one of the many clients of the villain costume designer who refuse to pay him properly for his work, he includes his outfit among his super-starch-powered costume army. "Vogue's Gallery" "Inversionary Tactics" "Fluffy's Reign of Terror!" "The Family Way" 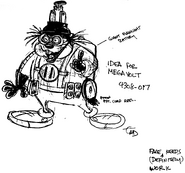 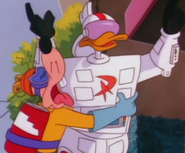 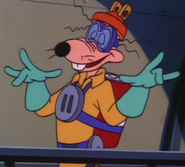 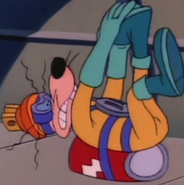 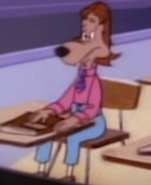 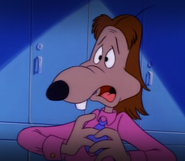 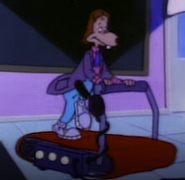 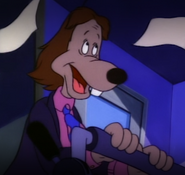 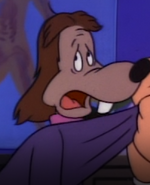 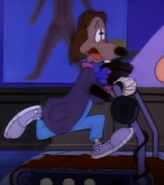 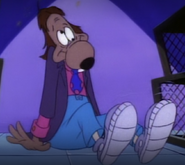 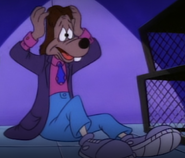 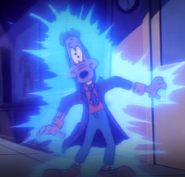 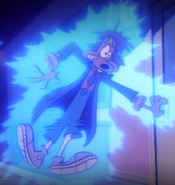 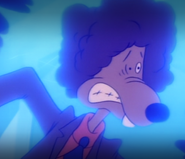 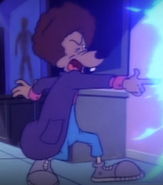 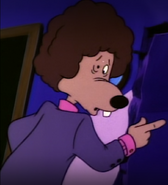 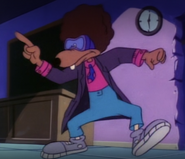 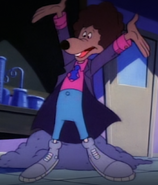 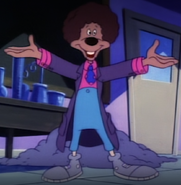 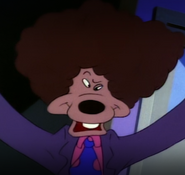 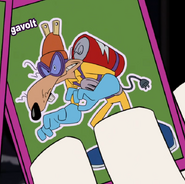 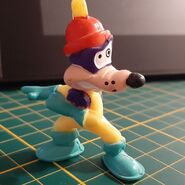 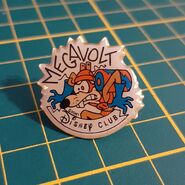 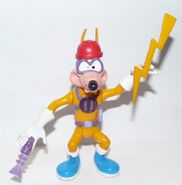