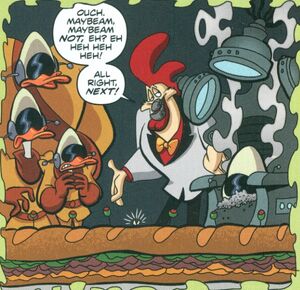 The maybeam is a device built by an unnamed F.O.W.L. scientist with the purpose of giving its users superpowers, although there are still improvements to be made. As Steelbeak put it when the maybeam was first tested, it is "highly experimental, mostly theoretical, likely unreliable, [and] possibly homicidal". Predictably, the first eggmen that tried it was disintegrated. The only important part of the maybeam is the beam, but the device is constructed as a large chair for an individual to sit in during the procedure. It may have been partially inspired by the norma ray, which F.O.W.L. shortly owned. It is not said what kind of superpowers could be gained from the maybeam, or for that matter if the DNA or psychological state of the user plays a role. All that is known is that, while the one eggmen to test it was turned to ashes, the second test subject, a fly, gained superstrength and superspeed from the exposure.

Steelbeak is assigned to supervise an experiment to create superpowered agents by means of the maybeam. As a motivating element, he has the experiment be conducted right next to the lunch table, which none of the eggmen was allowed to touch before they've volunteered. However, the first eggmen to give possible superpowers a go is disintegrated and even deluxe sandwiches can't beat that argument. As Steelbeak keeps the ordeal going, a mere fly wanders into the F.O.W.L. facility. It takes an interest in the food and lands on a sub, from which Steelbeak chases it away with a rolled-up newspaper. In trying to avoid death, the fly accidentally flies right in the superpower-inducing beam. Unlike the eggmen, the fly survives and comes out with superstrength and superspeed. The maybeam is blown up in the process. A Midsummer Gnat's Spree

Retrieved from "https://darkwingduck.fandom.com/wiki/Maybeam?oldid=21713"
Community content is available under CC-BY-SA unless otherwise noted.