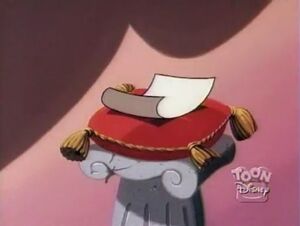 The master list of SHUSH agents is a document that contains the names of all agents employed by SHUSH, but omits the few independent operatives SHUSH periodically turns to. Despite this blind spot, the list is valued highly by the criminal community.

The master list of SHUSH agents is a classified document of great importance to SHUSH. It holds the identities of all the organization's serving agents, but does not name any freelance agents. Whether it contains the names of non-agent employees is unknown, but they too appear to not be included.

The master list of SHUSH agents gets stolen by Phineas Sharp as key component of a plan to simultaneously add to his reputation, destroy Derek Blunt, and make a pretty penny. To get Blunt involved, Sharp lets SHUSH know he has the list by means of a ransom letter and in order kills Perkins, Campbell, and two other agents to prove his claim. J. Gander Hooter takes the bait, but calls on Darkwing Duck in addition to Blunt because Darkwing, as a freelance agent, is not on the list and therefore provides the element of surprise. The logic is sound, even more so considering Sharp is not interested in ransom money. He intends to auction off the list to fellow criminals, whom he has invited to his island resort in the Salad Sea. F.O.W.L., Hammerhead Hannigan, Anna Matronic, Flintheart Glomgold, Magica De Spell, and the Beagle Boys all are interested. While Sharp arranges for the auction to proceed perfectly, the list is hidden away safely, but a fake with only the word "Gotcha!" on it is place behind an ostentatiously secured door for Blunt to find. He and Darkwing fall for the trap and are captured, but escape when Sharp is preoccupied hosting the auction. Darkwing hides in a suit of armor that is also to be auctioned off so he can get close to the list and steal it from under Sharp's nose. Sharp does not notice the theft until the list is up for auction and takes matters into his own hands. This is exactly what the two SHUSH operatives hoped for. They make it seem like Sharp caught them by surprise and killed them so that he takes back the list without looking at it. In actuality, what he retrieves is a shopping list. They are cruel enough to reveal their trickery to Sharp just as he has finished payment for the list with Hammerhead Hannigan. "In Like Blunt"