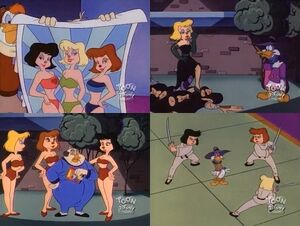 Master Lee's honeys are three women who train under and assist Goose Lee. Whether they are in on his illegal activities regarding the Ancient Dragon of Kung Pow and Ninja Land or not, they go along with his obnoxity.

Goose Lee accepted the women as apprentices some time after Darkwing Duck left. They might appear as simply a superficial part of his marketing campaign, but they are highly skilled martial artists who can take out groups with either their fists or swords. It is unclear whether they knew of Lee's plans to terrorize the citizens of Kung Pow City away and if so whether they had a part in it or not.

The women are loyal to Master Lee and share in his disregard for other people's safety and pride.

The three woman are dogs of medium height who may or may not have irises. They are identical in appearance but for their hair colors, which are blonde, brown, and black.

The women star in Goose Lee's Quick Quack Fu with Master Lee's Honeys. The blonde woman gets to star in a scene with Darkwing Duck as his date that needs to protect him. She does so flawlessly. Later, they are Darkwing's adversaries when Master Lee has him practice the Belly Bounce. "Kung Fooled"