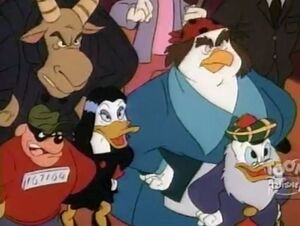 Magica De Spell is a sorceress from an family that's produced many generations of magicians. Even by those standards, Magica stands out as particular powerful and driven. Her main goal is to fashion herself an amulet with great magical qualities, able to grant her the Midas Touch and the spell to return her brother, Poe, back to his old self. To make this amulet, she needs Scrooge McDuck's Number One Dime. Ever since she's become aware of the coin's existence, she's been after it, striving to obtain it by whichever means necessary. Magica has her home in Mount Vesuvius, but has haunts and connections in Duckburg to make use of whenever she visits. She was voiced by June Foray, who also voiced Ma Beagle, in DuckTales. In the reboot, she is now voiced by Catherine Tate.

The De Spells are an Italian family of gifted magic users either part of or with close ties to the monster community. With the exception of Magica's fairy cousin Adelia,[1] all of them practice evil magic. Of note are Poe De Spell, Magica's brother, Minima De Spell, and Magica's niece who may or may not be Poe's daughter. Neither are much help in Magica's continuous quest to acquire Scrooge McDuck's Number One Dime, the latter because she is friends with Webby Vanderquack, the former because he's stuck in the form of a raven and only by having the Number One Dime can Magica augment her powers enough to turn him back.

Magica's motivations to acquire the Number One Dime vary between sources. According to some, she needs it to fashion herself an amulet that will grant her the Midas Touch. Others have her want it to acquire Scrooge's business luck. And then there's the aforementioned matter of helping her brother Poe. None of the reasons contradict each other, but coherency is not a factor either. All that is certain is that she won't rest until she has it, making her one of Scrooge's most fearsome enemies.

As a sorceress, Magica is evil, greedy and sometimes crazy. Her goal is to grab Scrooge McDuck’s Number One Dime to enhance her powers.

Magica has black hair with a matching dress and shoes. In the reboot, her dress is longer and sleeveless, she wears long, fingerless gloves, a black and purple cape, her skin is green and her eyes are catlike.

Magica is among the people visiting Phineas Sharp's island resort to attend his auction, which main prize is a list of SHUSH agents. She makes use of the swimming pool. In Like Blunt

Retrieved from "https://darkwingduck.fandom.com/wiki/Magica_De_Spell?oldid=25648"
Community content is available under CC-BY-SA unless otherwise noted.